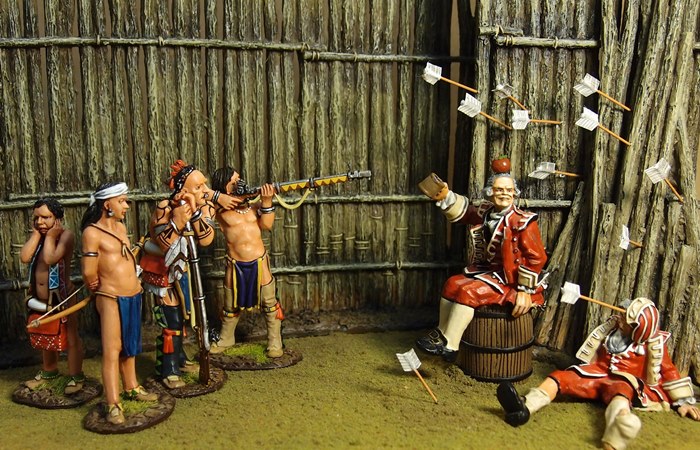 1. “Something tells me they’ve seen through my Carmen Miranda disguise.”

3. “The young braves soon learned the old indian adage that when a bow and arrow doesn’t work,
they must still try-a-gun,”

5. “Of all the legends to enthrall the natives you had to choose William Tell!”

6. “Abercrombie, thinking they were out of arrows started celebrating, not realizing the rules had changed.”

8. “Please tell me that I misheard the man’s name? I thought I heard “Shoots-an-inch-too-low.”

10. “I vehemently protest! The methods of the local temperance league are becoming really rough!”

“Good luck hitting the broadside of a longhouse with that thing!”

“It was at that moment that it occured to Private Jenkins
that this particular apple would surely spoil the barrel.”

“Who said that fire sticks and fire water don't mix?”

“Please tell me that I misheard the man's name? I thought I heard "Shoots-an-Inch-Too-Low.”

“Doctor? Doctor? My colleague here needs your services,
and I reckon that I too will be needing them in a moment.
Bloody Hell: if only this apple wasn't keeping you away today!”

“Come on, friends. Without my people you wouldn't have any muskets, liquor, or apples.
This doesn't seem fair at all.”

“Can I read over the rules again? I really don't think you're allowed to load with buckshot. Seriously.”

“What did I tell you, Jenkins: a foolproof cure for the cider hangover! No more splitting headache!”

“What's that expression again? As American as_Apple-shot_? No, no, that can't be right...”

“It is a little known historical fact that Major-General John Sedgwick (1813-1864)
was carrying on a proud family tradition begun by his great-grandfather,
Private Eustace Sedgewick (1729-1759), when he infamously misjudged that the enemy "could not hit an elephant at that distance."

“What are the chances of exchanging my commission, for a regiment on the British Isles?”

“My mother always said, that I should have joined the church instead of the army!”

“I don't suppose I could interest you in some beads?”

“What did you say they were called? Muskets?
They certainly fire the arrows further than our bows but they're not as accurate......”

"I vehemently protest! The methods of the local temperance league are becoming really rough!"

“Hey everyone, do it again!”

“It's a good way to get sauced. Put a tomato on your head.”

“The young braves soon learned the old Indian adage that when a bow and arrow doesn't work,
they must still try-a-gun,”

“If this is how the Indians torture their prisoners then I should have been captured a long time ago!”

“It was beginning to look more obvious who won the drinking contest between the Indians and their prisoners....or was it?”

“I propose a toast to that guy with the bow and arrow.”

"Of all the legends to enthrall the natives you had to choose William Tell!"

"You no can hit broad side of blockhouse with blunderbuss."

"Abercrombie, thinking they were out of arrows started celebrating, not realizing the rules had changed."

“ Something tells me they’ve seen through my Carmen Miranda disguise.”

“ Poor shot? He’ll be poking that apple off that chaps head if he gets much closer.”

“ That’ll teach me for asking now they make cider round here.”

“ Bet ya two Rabbits he misses.”

“ No wonder we couldn’t see the dart board when we walked in….WE’RE IT!”

“ Psst…have spectacles been invented yet?...Now’s as good a times as any.”

“ An early version of pool had been developed by the Abemaki.”

“ The next shot could decide the strip poker game.”

“ Oh the embarrassment. What if his dad was wearing a leopard skin thong.
The next shot could entirely ruin his street cred!!”

“ Well James, these Indians sure know how to thro a party. James…JAMES….?? Sorry!”

“ Myopic Elk and Bumps into Wigwam the greatest fishermen of the Abenaki nation.”

"HaHa, the jokes on you guys cuz we ain't paid our tab yet"

"So this isn't the men's room? I do apologize"

“English drinking songs have never been very popular in America.”

"The beer is flat, the pretzels are stale and the waitress is ugly. Could this place get any worse?"

"There's got to be a better way to make cider. No wonder these drunken palefaces call it hard!"

"An apple a day keeps the Redcoats away.”

“ The soldier with the glass to his comrade:
"I TELL you that William: these people have a strange method for making an apple juice!"

"Barclay, how in the hell did he get your musket?" "Barclay, Barclay?’