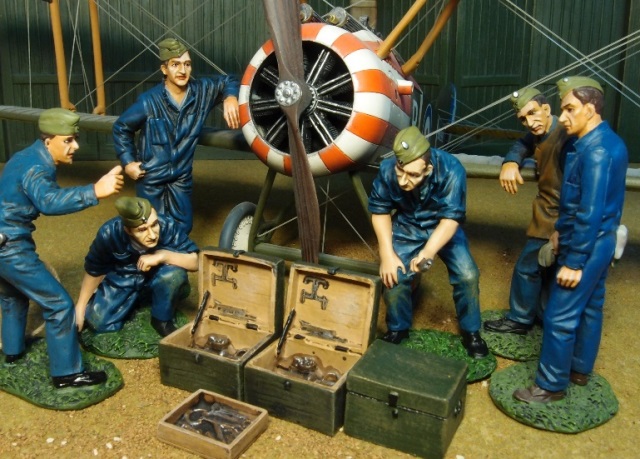 2."Jones was up next…..with the game on the line would he toss the wrench, play the hammer option or choose box #2?"

3."To while away the time the RFC lad’s often played a game of 'Spot the difference'."

4.Christmas 1918: "Well if those contain gold and Frankincense the third box must be the myrrh."

"Smith was always throwing a wrench into the mechanic corps’ plans, so as a punishment,
the seargent ordered him to do some real wrench throwing."

"If it wasn’t for Briggs goofing up the tool selection the ground crew would have passed inspection.
so before the seargent returned, the crew made sure that Briggs got lots of practice."

"Right, how is it going to fit back into the box?"

"Right, we need a tool to connect the propeller thing to the fuselargy thing, any suggestions?"

"With no paint drying, they had to watch something."

"Before the advent of television, ‘watching the toolbox’ was a popular pastime……although there were many repeats."

"OK, OK, didn’t one of you think of writing your name on yours?"

"After a long tour in the field, the men did not want to hear about who or what they weren't allowed to "Covet""

"It’s not the Hun in the sun you have to worry about it’s the Jack in the box. Private Brown did like his little jokes!"

"Ok who ordered pastrami on rye with a side of coleslaw?"

"Once emergency personnel arrived the dead mouse was safely removed and flight operations returned to normal."