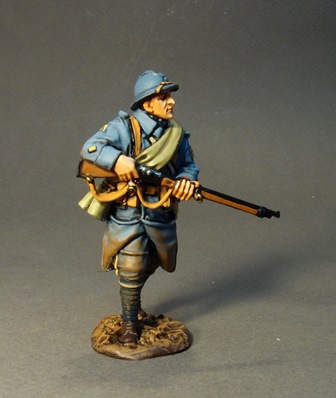 
The French army was manned by conscription ,
and every 20 year old male was liable for three years' service.
Most men would go into the infantry,
and these were men primarily from an agricultural background,
with those who had worked on railways, public works,
shipyards and telecommunications going into the artillery.

Infantry Regiments were created on a local basis,
similar to the British Pals battalions.
The peacetime army had a strength of 817,000 men,
augmented on mobilization to 2,944,000.
During the war 7,800,000 men served with the "colours",
about 80% of the population of men eligible to fight.

Water was scarce in the front line,
and the growing of facial hair led to the nickname "Poilu"(hairy one).
The traditional nickname of the infantry was "Les Biffins" (the rag and bone men),
initially to each other they were "Les bonhommes" (the lads),
or as the war drew out, "Les pauvres cons du front" PCDF, (the poor bastards at the front).