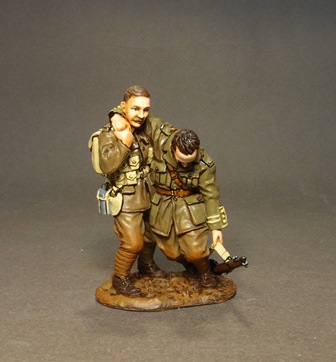 
The first VC awarded during the first World War to a Welshman.

On 14 September 1914 near Chivy-sur-Aisne, France,
Lance-Corporal Fuller advanced under very heavy enemy rifle and machine-gun fire to extract an officer who was mortally wounded,
and carried him back to cover.
Fuller won his VC for saving Captain Mark Haggard, nephew of Rider Haggard,who had fallen wounded.
He carried him a distance estimated at 100 yards to a ridge where he managed to dress the officer's wounds.
Capt Haggard asked L/Cpl Fuller to fetch his rifle from where he'd fell. He did not want the enemy to get it. Fuller managed to do this.

With the help of two others,
Private Snooks and Lieutenant Melvin, Officer i/c the machine-gun section of the Welsh Regiment,
they managed to get Haggard to the safety of a barn that was being used as a First-Aid dressing station.

L/Cpl Fuller remained with Captain Haggard trying to help him until the officer died later on that evening.
His last words to Fuller were "Stick it, Welsh."
After he'd died L/Cpl Fuller attended to two other officers who had also been brought to the barn wounded.
(Lt. The Hon Fitzroy Somerset and Lt. Richards.) The barn came under heavy fire and the wounded men and officers were evacuated.
Later it was razed to the ground with German shell-fire.

On the 29th of October he was wounded while dressing the wounds of Private Tagge a fellow soldier,
shrapnel entered his right side,
twelve inches in up to his shoulder blade and came to rest on his right lung.
After he was sent to Swansea Hospital where they operated, removing the shrapnel.
He was given a home posting after his recovery,
as a successful recruiting sergeant in his native Wales.


This set has been a special project between jjDesigns and The Tin Shed Museum in Laugharne.
It has been produced to honour a local hero, and support the museum.
Laugharne is a small coastal town in West Wales,
20 minutes drive from Carmarthen.
It is most notably known as the home of Dylan Thomas,
and the inspiration for his work "Under Milk Wood”

The Tin Shed Museum was set up in 2011, by Andrew Isaacs and Seimon Pugh-Jones.
Andrew was an armourer and Seimon a photographer.
Seimon's camera work has taken him into the realms of staff photographer for an American War Magazine (Armchair General)
and has seen him work on many historical features such as "Band Of Brothers".

John Jenkins was born and brought up in Carmarthen,
and had worked for many years as a Designer in Welsh language TV and Theatre.
Seimon and he had never worked together,
but both were aware of each other's abilities.
It was John's eldest sister Sarah, who finally introduced the two Carmarthen boys,
and suggested that they work together to design and produce a figure of W.C Fuller,
to commemorate the local VC winner from Laugharne.

The set #100 of this Limited Edition set,
will be presented to Seimon and Andrew,
at the London Toy Soldier Show, 7th June 2014.