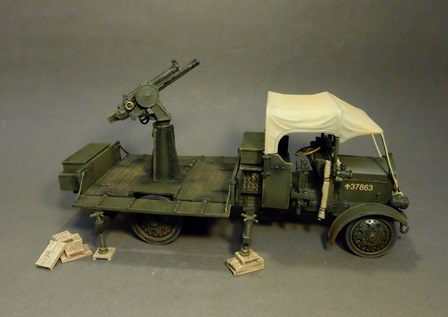 It was decided that the operation of these Anti Aircraft guns
would be the responsibility of the Royal Garrison Artillery.

Each Anti-Aircraft section comprised of two lorry mounted guns,
one staff car and one motorcycle.
The sections were used to protect targets likely to be attacked
by enemy aeroplanes such as ammunition dumps,
observation balloons, and railheads.
The gun trucks would find somewhere suitable to set up
(a sunken road being an ideal location)
and make themselves comfortable while waiting for the enemy to fly into range.

Once an enemy plane was identified the gun would be brought into action.
It was extremely difficult to identify the speed and height of a moving aeroplane,
and then setting the appropriate fuse,
was far from easy!
It became a widely held belief that if enough rounds were fired into the air they would eventually hit something……

In 1917 only 95 aircraft were shot down by antiaircraft fire.

With the development of new equipment,
such as the Wilson Dalby Tracker,
and the Barr and Stroud UB2 Rangefinder,
this was to improve, and 176 were recorded as being shot down the following year.