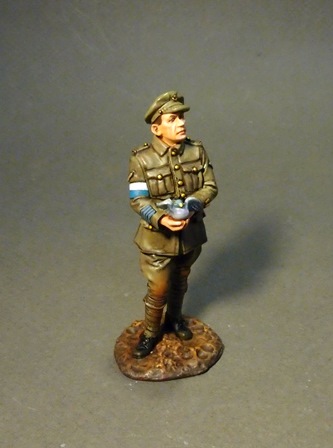 
The British did not have a separate Corps of Signals in the Great War:
it was agreed that an independent unit would be formed in 1918,
but for various administrative reasons it was delayed until 1920.

At the outbreak of war in August 1914 all the British Armies signalling/
intercommunication requirements were met by the Royal Engineers Signal Services (RESS) that was formed in 1908.
Previously, in 1870,
the responsibility for all military communications was
officially given to the Telegraph Troop, of the Royal Engineers. 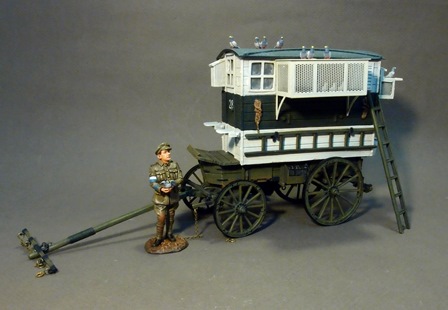 **Please Note, more figures with pigeons are on the workbench,
together with a pair of horses for the Pigeon Wagon.**

Whilst rather primitive and cumbersome wireless sets were available using,
Morse Code, the British Army could not find any practical application for wireless
at the early stage of the War and it was not until the final months of war in 1918 that wireless sets
became widely deployed at the battalion level.

The inter-communications situation grew worse in early 1915
as the tempo of war increased and enemy activity and the winter weather wrought damage
to the existing military communication systems.
Many telegraph lines and (as they expanded, telephone lines)
were either strung out in the open on ad hoc supports or buried in shallow trenches.
The passage of men and material wreaked serious damage on the system,
as did the incessant shelling in certain sectors.
At that time the high explosive shell fuses only exploded when the round had penetrated quite deeply into the ground and was thus,
potentially, in close proximity to the buried telephone lines.

Increasing recourse was had to pigeons carrying coded messages
from the Front Line to the battalion HQ and beyond.
Originally the British Army on the Western Front did not have any messenger pigeons.
But in September 1914, the French provided a nucleus aviary of 15 pigeons
from which was developed a bird strength of thousands:
12,000 pigeons were deployed at the First Battle of the Somme in 1916,
and by 1918, 20,000 birds were available for duty.

Messenger dogs (Liaison dogs) were introduced for night work with mixed results.
They tended to be spoiled as regimental pets
and were much more susceptible to toxic gas and battle stress than the pigeons.