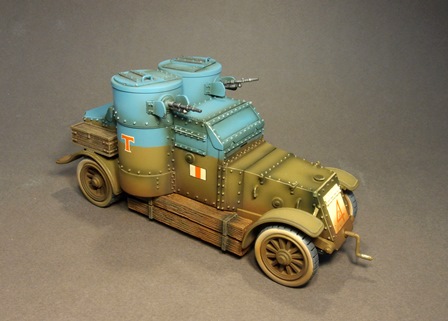 
It was the admiralty who were to pioneer the use of the armoured car.
The officers enjoyed driving fast cars so they took their cars
with them when they became stationed at Dunkirk at the start of the war.
Having also mounted some weapons in their cars,
the naval officers would drive around northern France and Belgium looking to find sites for airfields,
and to recover pilots, even those that had crashed behind enemy lines.

During the fighting at Amiens as part of the 5th Australian Division,
16 cars were towed in pairs across the trenches and battlefield by tanks,
and were then let loose behind the german lines creating havoc around Proyart and Framerville.
A German Corps Headquarters which was located 10 miles behind the front lines was captured
, and in honour of the Australian Division an Australian flag was nailed to the German generals, front door.
Detailed plans of the Hindenburg line were captured and german reserves,
artillery and supply lines were shot up, including a train.
The greatest value of these cars was in the spreading of fear and rumour.
German troops were reporting a new British tank which could travel 30mph and spout fire in all directions.
It was said that the 16 cars were "worth more than a whole cavalry division."

At the time of the Battle of Amiens the armoured cars were painted sky blue and khaki
, in the hope that they would not show up against the horizon.

The 17th Battalion were to be the first British unit to cross the Rhine in 1918. 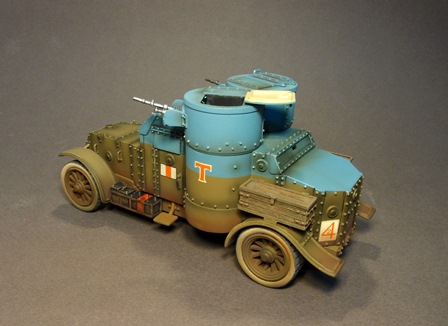