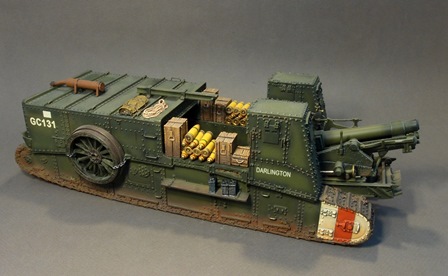 
The Gun Carrier Mark I was the first piece of self-propelled artillery ever to be produced.

During 1916 it became clear that in case of a breakthrough,
the very purpose of the first tank, the Mark I,
artillery would have great trouble following the advancing troops.
Any successful offensive would therefore be in danger of stalling immediately.
To solve this problem Major Gregg,
an engineer working for the main tank producing company Metropolitan,
Carriage, Wagon and Finance,
proposed to build special mechanised artillery,
using parts of the Mark I.
The production of a prototype was approved on 5 June 1916;
the actual design began in July.
The first prototype was ready to participate in the Tank Trials Day at Oldbury on 3 March 1917.
An order of fifty vehicles was given to Kitson & Co. in Leeds.
Deliveries to the army started in June and ended in July.

The vehicle bore little resemblance to the Mark I.
The tracks weren't tall but low, almost flat.
At the back a rectangular superstructure covered the Daimler 105 hp engine together with the transmission of the Mark I,
the latter now in a reversed position.
Sharing it were the vehicle commander,
a mechanic and two gearsmen.
The original double tail wheel of the Mark I,
intended to aid steering and attached to the rear of the vehicle,was retained.
The front was an open area with either a 60-pounder (5-inch) field gun or a 6-inch howitzer. 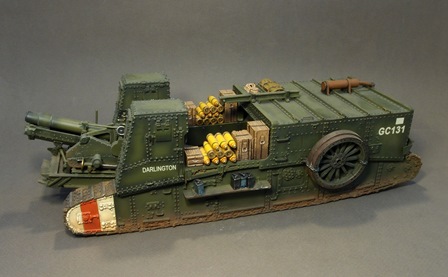 For transporting the gun only the wheels had to be removed from the gun carriage
- these were attached to the side of the carrier until needed again.
In theory, the field gun could be fired from the vehicle;
in reality only the howitzer could be so used.
Alternatively the guns could be unloaded through a pivoting cradle assisted by two winding drums driven by the engine.
Above the front of the track frame at each side was an armoured cab for the driver on the left and the brakesman on the right.
In the prototype these driving positions were directly in front of the superstructure; moving them forward improved visibility,
but made communication very difficult - a problem as,
in the Mark I, four men (including the gearsmen) had to cooperate to steer the tank.

In July 1917 two Gun Carrier Companies were formed of 24 vehicles each.
Probably none of them ever fired a shot in anger. 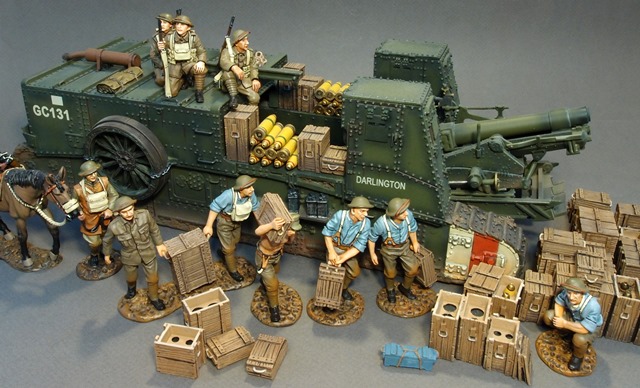