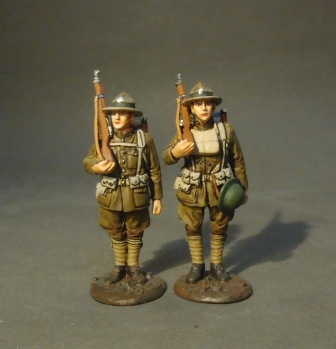 
The United States of America
declared war against Germany and the Central Powers on 6th April 1917.
Spurred by the slogan "First to Fight" there was a rush of recruits into the Marine Corps.
The newborn Marine Corps Reserve, mobilized on 16 April,
contributed three officers and thirty-three enlisted men.
The recruit depots at Parris Island and Mare Island were soon swamped,
and temporary recruiting centers had to be opened at Philadelphia,
Brooklyn, and Norfolk Navy Yards.
On 14 May, six thousand acres were leased at Quantico,
south of Washington, as the beginnings of a major new base.

Maj. Gen. Cmdt. George Barnett was determined
that a Marine expeditionary force would be on board the first convoy to sail for France.
On 29 May, President Wilson approved the sending of a Marine regiment equipped as infantry.
The stipulation was that the Marine regiment be organized
and equipped according to the new wartime tables of organization developed by the Army.
Marine regiments were small units of about eight hundred to a thousand men,
a collection of numbered rifle companies of about 100 men each.
The companies would have to be brought up
to a strength of about 250 men and organized into battalions and then into regiments,
with machinegun companies added.