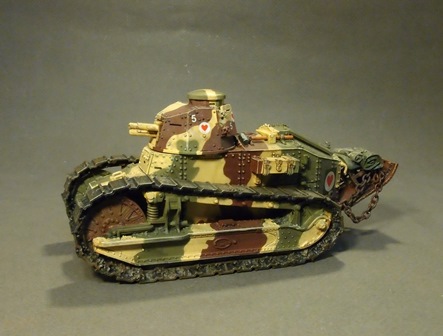 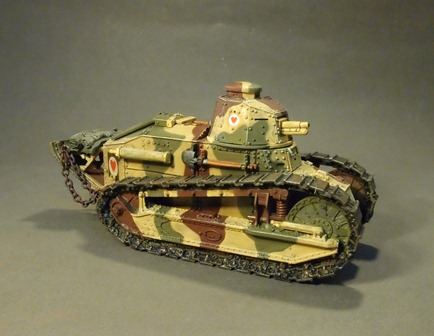 Inter-tank communication also posed difficulties.
As the tanks were not equipped with radios,
unit commanders with orders to give and messages to deliver could do so only by
leaving the safety of their own vehicles and making their way on foot to the other tanks.
The Tank Corps tried to get around this problem by providing
the crews with carrier pigeons, which were kept in bamboo cages on the floor
of each tank behind the driver. The tank commander would stand on the cage,
with predictable results: at some point during his machine's jolting
passage over the broken ground of the typical First World War battlefield,
he might inadvertently stomp down on the cage and crush its occupants.
Finally, it was decided that junior officers would be delegated
to walk alongside the tanks for the purpose of communicating orders and other information.
Keeping up with the tanks was really no challenge,
as the vehicles could manage a top speed of only four-and-a-half miles
per hour under even the most optimal conditions.
When the officers had instructions to impart they would simply
rap on the hulls of the tanks until they got the attention of the men inside.
The greatest problem leaders faced was,
of course, exposure to enemy fire.
Running messages back and forth between tanks,
across open ground, in the thick of battle while the bullets
were flying, required courage and devotion to duty --
virtues which resulted in the award of Distinguished Service Crosses
to several of those engaged in this hazardous enterprise.