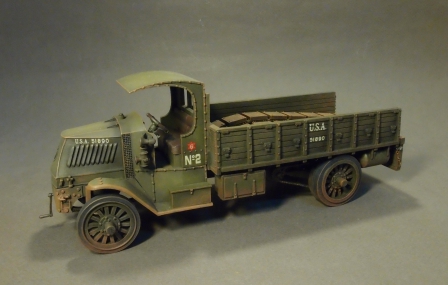 Mack AC "Bulldog" haulers are legendary workhorses.
During their 20-plus years of production (1916-1939),
they were employed in many heavy industries including logging,
petroleum, construction, and nearly anywhere a rock-solid chassis cab was needed.
They were available with up to a 7.5-ton load capacity.
The U.S. military made extensive use of the AC during WWI.
Many of them remained in the countries where they served and were put to use by civilians for decades afterward.

Mack delivered over 6,000 trucks, both to the United States and Britain's military.
A legend surfaced that British soldiers would call for Mack Bulldogs to be sent when facing adversity.

Mack Trucks, Inc.,
is an American truck–manufacturing company and a former manufacturer of buses and trolley buses.
Founded in 1900 as the Mack Brothers Company,
it manufactured its first truck in 1907 and adopted its present name in 1922.


The model truck, will come with two "Tank Loading Ramps".
These will slot onto the rear of the truck, and can be stored under the RENAULT tank.