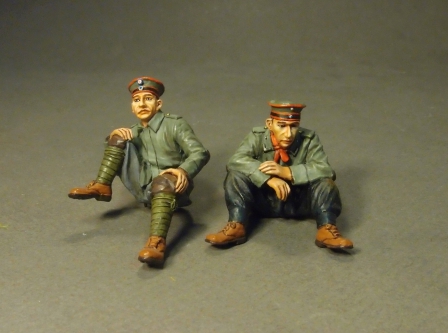 
The STURMPANZER A7V was a tank introduced by Germany in 1918,
during World War I.
One hundred chassis were ordered in early 1917,
ten to be finished as fighting vehicles with armoured bodies,
and the remainder as cargo carriers.
The number to be armoured was later increased to 20.
They were used in action from March to October of that year,
and were the only tanks produced by Germany in World War I to be used in operations.

Unlike modern tanks,
the A7V has no turret.
Instead, it has a cupola for the commander and driver,
and its main gun,
a 57mm Maxim-Nordenfelt,
is carried in a mounting in the front,
allowing limited traverse.
Six Maxim 08 machine guns are carried in mountings, two on each side and two to the rear.

Crews for the small German Tank Army were drawn from the various branches of the Army,
all according to their usage: gunners from the artillery,
signallers from the communications branch, machine-gunners from the infantry,
drivers, mechanics and commanders from the motor troops.
They had no special uniform or insignia,
and used the standard field uniform.
Neither did they have any special insignia,
but used the ones of their original organisations.
Leather patches were worn on knee and elbow Also the German Tankers were issued overalls.
These were one-piece suits, made either in heavy cloth or in leather;
they were normally restricted to drivers,
and sometimes to the mechanics as well.
They were often worn together with a low, padded,
dome-shaped crash helmet.
These overalls came with buttons and loops on the shoulders,
to allow for the attachment of shoulder straps.
German Tankers also used the same type of strange mailed face mask as the British,
and often these masks seems to have been captured equipment.