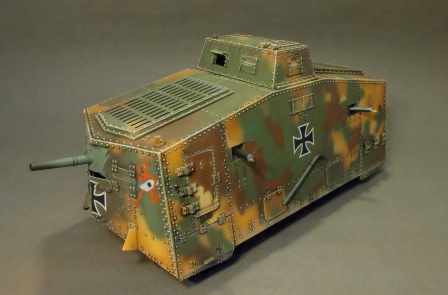 The STURMPANZER A7V was a tank introduced by Germany in 1918,
during World War I.
One hundred chassis were ordered in early 1917,
ten to be finished as fighting vehicles with armoured bodies,
and the remainder as cargo carriers.
The number to be armoured was later increased to 20.
They were used in action from March to October of that year,
and were the only tanks produced by Germany in World War I to be used in operations.

Unlike modern tanks,
the A7V has no turret.
Instead, it has a cupola for the commander and driver,
and its main gun, a 57mm Maxim-Nordenfelt,
is carried in a mounting in the front, allowing limited traverse.
Six Maxim 08 machine guns are carried in mountings,
two on each side and two to the rear.

Sturmpanzer A7V, named "Mephisto",
and numbered 506, was originally a 1st Lot,
standard-production model produced by the Rochling factory,
and was initially a female tank, only armed with machine guns.
It was to be converted to a "buck-mount" male,
and is today the only original A7V tank to survive.

In April 1918, the tank was issued to Abt.3,
and was repainted and named "Mephisto",
with its upper left prow decorated just before the Battle of Villers-Bretonneux,
with the emblem of a red devil running with a snatched British rhomboid tank.

It was to participate in the Battle of Villers-Bretonneux,
but after a successful advance, which saw it take a large number of prisoners,
it became disabled as it plunged into a large shell hole.
The crew abandoned the tank, and went on to fight as an assault party.

Initially the tank remained inside the German lines,
but was too close to the frontline for recovery.
During this time it was hit by at least one shell in the forward fighting compartment,
and Australian reports also claim that the tank was used as a strongpoint by German infantry.


The 26th Battalion of the 7th Brigade,
mostly from Queensland, hatched a plan to capture it.
In July 1918, under cover of an artillery barrage,
the Australian infantry and two British vehicles (either Gun Carriers or Mark IV tanks)
moved forward and dragged it back to their lines;
the Germans were still in sight of the tank and firing at them.
They had to don gas masks after poison gas was deployed.

The soldiers who captured Mephisto later hammered their names into the front armour:
"TANK BOYS \ H. WILLIAMS, J. BYFORD, A. MCFARLANE, J. PICKLES, H. DUTTON, T. HUGHES
The tank was then graffitied by Australian troops,
with a painting of the AIF rising sun emblem.
Machinations began to take the tank back to Australia,
but the British wanted to keep it for the Imperial War Museum.
It was quickly put on a ship destined for Sydney with the Australian infantry that captured it.
The ship was supposed to deliver it to Sydney,
with plans for it to go to the war memorial in Canberra's display,
but it was diverted to Brisbane and unloaded there.
Two steam traction engines moved it from the ship to the Queensland Museum, dragging it on its tracks.