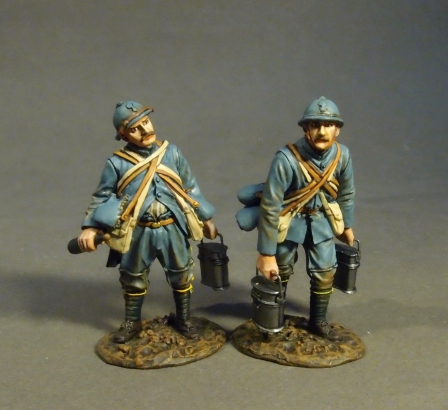 
Initially, Frances armed forces were designed to fight,
fend for, and feed at a company or battalion level.

This meant that soldiers who were line infantrymen might also be cooks, laborers,
supply clerks and maintenance personnel,
with fatigue details being assigned on a rotational basis between the non-specialists.
In garrison, or on maneuvers, this worked splendidly.
When the day's work was done,
the cooking detail would set up the kitchen area,
cook and serve the meal, and everyone was happy.

For emergency use, troops carried an emergency ration,
but no one would touch that except in old Legionnaires' barroom tales of the Legion in 'wild places'.

While the front lines were still somewhat flexible,
field unit based kitchens were becoming less and less feasible.
By the time the front froze at the trench line from the channel to the Swiss border,
they had become impossible.
Many troops would receive fresh ration supplies,
but with the trench networks initially only being laid out for close-up combat,
no provisions for regular cooking was made.

This meant that troops subsisted on fresh bread, fruit, wine and sausages.
Iron rations were limited due to supply shortages,
and generally the only warm meal happened if a section or
a platoon managed to set up a makeshift kitchen to use
the supplies arriving in an irregular fashion before they could spoil.
Even then, the best troops could hope for was some sort of soup or stew,
or a cup of coffee if they were not so lucky.

The Field ration consisting of an abbreviated menu and was the main ration type scheduled for troops.
Traveling kitchens would set up in areas adjacent to the combat zone,
and would prepare more-or-less edible and definitely not nutritionally balanced meals,
which would then be hauled to the front lines.
This detail of being a 'soup man' was considered to be a job more hazardous than combat infantryman,
as you had to traverse ground generally covered by enemy pre-planned artillery fires,
while carrying equipment that made it hard to seek cover, run or hide.

Food that did make it to the front was generally at least cold and of dubious quality,
and often times soiled and near inedible,
such as bread that was carried without wrappers of any kind, coffee (le jus) transported in open cans etc.
Menus consisted of a variety of poorly prepared dishes, which include open rack roasted meats,
previously salted (and mostly too salty) fish,
various pâtés made of meat scraps, lard and vegetables, rice,
and beans of every description, at times just cooked together in more or less edible stews.
Luckily, along with these rations came (if at all possible) a serving of 'pinard',
the cheap wine issued to all French forces.
British troops lucky enough to get some eventually combined
all French terms like pinard or vin blanc into the ubiquitous (and still current!) term 'plonk', describing any cheap wine.