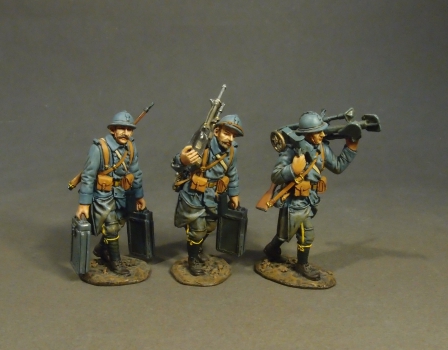 
The French St. Étienne Mle 1907 (French: Mitrailleuse Mle 1907 T)
was a gas operated air-cooled machine gun in 8mm Lebel which was widely
used in the early years of the First World War.
The "St.Etienne Mle 1907" was not derived from the Hotchkiss machine gun.
Instead it was an entirely different gas operated blow-forward design
borrowed from the semi-automatic Bang rifle of 1903.
This Bang system was first transposed in 1905 to the French Puteaux APX Machine Gun
which soon proved to be unsatisfactory.
Then, two years later, the Mle 1907 "St-Etienne" machine gun
followed as an improved redesign of the "Puteaux" machine gun.
However the Mle 1907 "Saint Etienne" was only a partial redesign :
the original blow-forward gas piston,
rack-and-pinion system, and bolt mechanism of the Mle 1905 " Puteaux" machine gun
had all been kept only slightly modified inside the newer weapon.
Eventually a total of over 39,
700 "St-Etienne" Mle 1907 machine guns were manufactured between 1908 and late 1917.
They were widely used by French infantry during the early part of World War I
until their replacement by the distinctly more reliable Hotchkiss M1914 machine-gun.