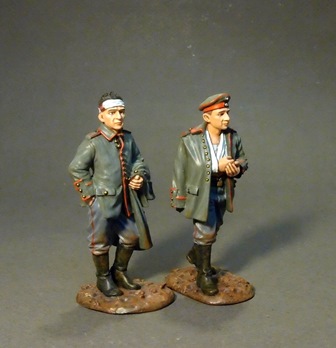 
Within the first six months of the First World War,
more than 1.3 million prisoners were held in Europe.
Accommodating so many POWs was a huge problem for all countries involved.
Allegations of cruelty and neglect were commonplace.

Treaties covering the treatment of POWs
were agreed before the war (the Hague and Geneva Conventions),
but German propaganda reported widely on the brutality of Allied camps
to encourage their soldiers to fight to the death as a preference to being captured.
Likewise, in Britain, it was claimed that Allied prisoners in Germany were systematically persecuted
by order of the German government.
Inspectors from neutral countries were called upon to check on camp conditions.

When war was declared in 1914,
there was no system in place on either side for dealing with POWs.
Camps were hastily set up according to need.
Many camps were built from scratch but existing buildings were also utilised.
The early camps were found to be over-crowded,
though this situation improved in Britain once makeshift camps were replaced.
Complaints about German camps centred on inadequate sanitation,
housing and food (for which the Allied naval blockade was partly responsible),
the nature of work assigned to prisoners and the brutal behaviour of the guards.
POWs in Turkish camps, except for officers,
were treated particularly harshly.