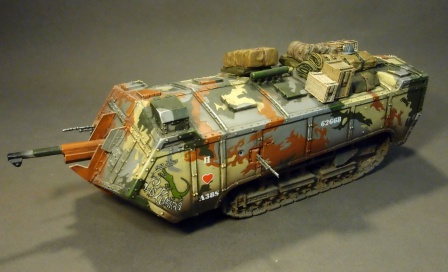 The Saint-Chamond was the second French heavy tank of the First World War,
with 400 manufactured from April 1917 to July 1918. Born of the commercial rivalry
existing with the makers of the Schneider CA1 tank,
the Saint-Chamond was an inadequate underpowered design. Its principal weakness was the "caterpillar" tracks.
They were much too short in relation to the vehicle's length and heavy weight (23 tons ).
Later models, however, attempted to rectify some of the tank's original flaws by
installing wider and stronger track shoes, thicker frontal armor and the more effective 75mm M1897 field gun.

The Saint-Chamond tanks remained engaged in various actions until the late summer of 1918,
belatedly becoming more effective since combat had moved out of the trenches and onto open ground.
Eventually, however, the Saint-Chamond tanks
were scheduled to be entirely replaced by imported British heavy tanks.

On 11th June 1918,
during a French counterattack triggered by the German offensive
on the Matz River on the 9th June,
Char St. Chamond No. 62668 of the second battery of AS 38 was captured
by the German Infantry Regiment No.91 at Lataule.
The vehicle which displayed the name "Petit Jean"(Little John),
also the slogan "Pas Kamarad"(No Mercy)
and the image of a crocodile,
had apparently got lost and finally became stuck in a cemetery wall.

Luckily for the French crew,
the Germans did not heed the slogan,
"Pas Kamarad", and Marechal de Logis Durand and his crew went into captivity unharmed.

The tank was salvaged with the assistance of an A7V,
and sent to B.A.K.P 20,
where it was recorded as being under reconstruction.
Apparently the intent of the German mechanical engineers,
was to study the vehicles petro-electrical transmission,
rather than converting it into a German fighting tank.


The inscription on the cannon reads, "Toujours, et encore"(Always and once more)

** PLEASE NOTE THAT OFFERED WITH THIS SPECIAL 10th ANNIVERSARY SET,
EVERY 10th SET OF THE LIMITED EDITION SETS WILL INCLUDE 2 TANK CREW FIGURES

French interest in camouflage painting had been inspired by Guirand de Scevola,
an academic painter who was serving in the artillery near Metz.
The painter was familiar with artistic theories especially cubism,
and persuaded his unit's officer to let him try disguising the unit’s gun batteries.
His effort was so successful that the Ministry of War established the
"Section Camouflage" which recruited artists and craftsmen.

These early camouflage attempts tended to be quite intricate and fussy,
involving multiple paint colours,
and required considerable skill to apply.