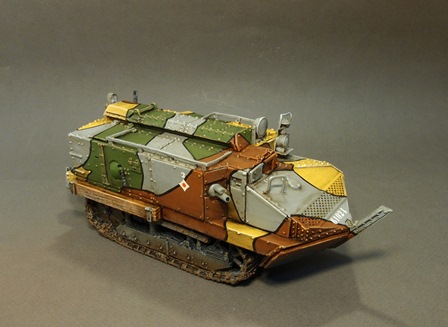 
The Schneider Tank was the first French Tank
The Schneider tank was inspired by the need to overcome the stalemate of trench warfare
which on the Western Front prevailed during most of the Great War.
It specifically had to open passages for the infantry
through barbed wire and then to suppress German machine gun nests.
After a first concept by Jacques Quellennec devised in November 1914,
the type was developed from May 1915 onwards by engineer Eugène Brilliè,
paralleling British development of tanks the same year.
Colonel Jean Baptiste Eugène Estienne in December 1915 began to urge for the formation of French armour units,
leading to an order in February 1916 of four hundred Schneider CA tanks,
which were manufactured by SOMUA,
a subsidiary of Schneider located in a suburb of Paris,
between September 1916 and August 1918.

The tank was of the "box" type, lacking a turret, with the main armament,
a short 75 mm cannon, in the right side.
Generally it is considered a very imperfect design, even for its day,
because of a poor lay-out, insufficient fire-power,
a cramped interior and inferior mobility due to an overhanging nose section.
v The Schneider CA 1 tanks were widely used in combat during the last war years.
Their first action on 16 April 1917 was largely a failure,
the tank units suffering heavy losses,
but subsequent engagements were more successful.
In 1918 the Schneider tanks played an important role in halting
the German Spring Offensive and breaking the German front in the French summer offensives.
They were active until the end of September 1918,
less than two months before the Armistice of 11 November 1918,
their numbers having dropped considerably due to attrition.
After the war the surviving tanks were mostly rebuilt as utility vehicles
but six Schneider tanks were deployed by Spain in the Rif War in Morocco,
and the type saw its last action in the beginning of the Spanish Civil War.