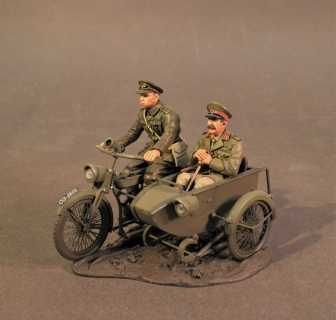 The British did not have a separate Corps of Signals in the Great War:
it was agreed that an independent unit would be formed in 1918,
but for various administrative reasons it was delayed until 1920.
At the outbreak of war in August 1914 all the British Armies signalling/
intercommunication requirements were met
by the Royal Engineers Signal Services (RESS) that was formed in 1908.
Previously, in 1870, the responsibility for all military communications
was officially given to the Telegraph Troop,
of the Royal Engineers.

A despatch rider (or dispatch) is a military messenger,
mounted on horse or motorcycle (and occasionally in Egypt during World War I, on camels.
Despatch riders were used by armed forces to deliver urgent orders
and messages between headquarters and military units.
They had a vital role at a time when telecommunications were limited and insecure.
They were also used to deliver carrier pigeons.

In the British Army, motorcycle despatch riders were first
used in the World War I by the Royal Engineers Signal Service.
When the War Department called for motorcyclists to volunteer
with their machines for despatch work at the start of August 1914,
the response was huge.