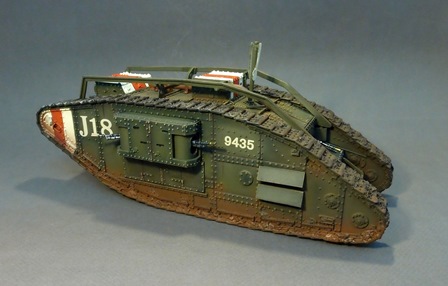 The Mark V was first used in the Battle of Hamel on 4 July 1918,
when 60 tanks contributed to a successful assault by Australian units on the German lines.
It went on to take part in eight major offensives before the end of the War.
Canadian and American troops trained on Mk Vs in England in 1918, and the American Heavy Tank Battalion
(the 301st) took part in three actions on the British Sector of the Western Front in late 1918.

During the Battle of Amiens in August 1918,
288 Mark V tanks, along with the new Whippet and Mk V*,
penetrated the German lines in a foretaste of modern armoured warfare.

At the Battle of Amiens, B Company was organised into 5 sections, of 4 tanks each.
Three tanks per section were in front or alongside the first infantry wave. One tank would be in reserve.
At least one of these tanks in the front section would be a "COMPOSITE" variant of the Mark V.

The "Hemaphrodite", or "Composite" version of the Mark V tank, consisted of a "Male",
heavy gun on one side of the tank,
and "Female" machine gun variant on the other side of the tank.

For those collectors who could not make up their minds whether to purchase the "Male" or the "Female"
This is the answer! 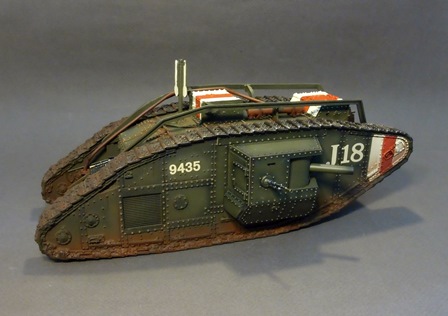 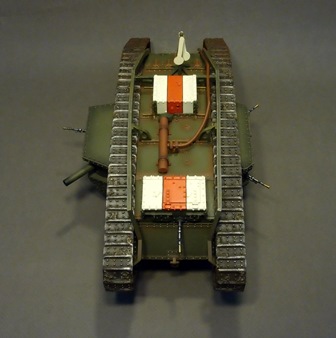 J18 was unable to keep direction in the mist so went to the Bray Corbie Road
and proceeded along it to k13d.7.0 where it encountered considerable hostile MG fire from south of the road.
Tank went to K20a.7.65 [?] where it left the road and patrolled about k20a.7.9, k9d, k16a and k15d.
Tank was hit by an AT bullet which set off a 6pdr round and broke the rum ration.
Many MGs fired on the tank, at least six were run over,
the Hotchkiss guns kept jamming and this allowed parties of enemy to escape into the mist.
At 9.30am mist cleared but further enemy MGs could not be located, the tanks were under heavy shellfire so they rallied. 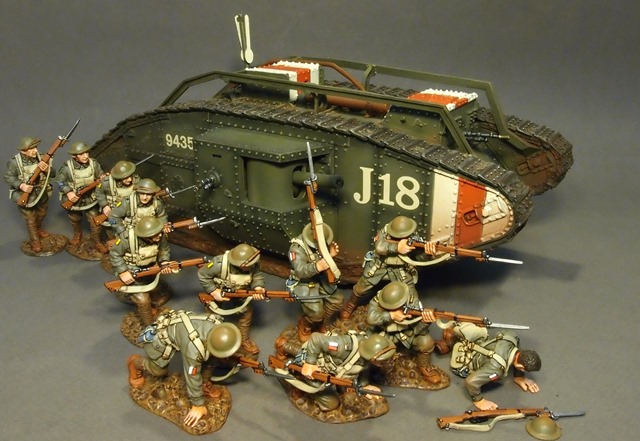