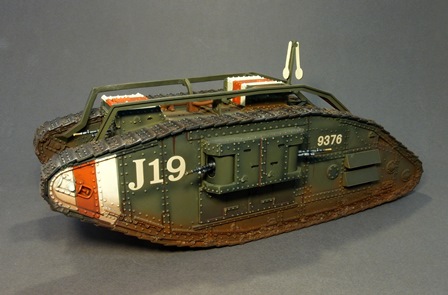 The Mark V was first used in the Battle of Hamel on 4 July 1918, when 60 tanks contributed to a successful assault by Australian units on the German lines.
It went on to take part in eight major offensives before the end of the War.
Canadian and American troops trained on Mk Vs in England in 1918,
and the American Heavy Tank Battalion (the 301st) took part in three actions on the British Sector of the Western Front in late 1918.
During the Battle of Amiens in August 1918,
288 Mark V tanks, along with the new Whippet and Mk V*,
penetrated the German lines in a foretaste of modern armoured warfare.

At the Battle of Amiens, B Company was organised into 5 sections, of 4 tanks each.
Three tanks per section were in front or alongside the first infantry wave. One tank would be in reserve.
At least one of these tanks in the front section would be a "Female" variant of the Mark V.
The "FEMALE" tank featured multiple machine guns instead of the heavier armament
seen on the much more common "MALE"tanks.
As such, female tanks were normally cast in an anti-infantry role.

J19 (Zero hour is given as 6.30 am on ) was in action for 4 hours and fired1050 rounds SAA,
after action at J24d.6.1. Stared at Zero + 10 due to mechanical trouble,
proceeded along Bray Corbie road catching infantry at crossroads k21b.6.9.
Tank led infantry until they were held up by an MG which the tank then silenced with Mg fire,
covered infantries consolidation,
silencing 4 MGs whilst doing so. At infantries request moved to a ridge,
left front and broke up the enemy who were trying to rally and dig in,
many casualties were inflicted.
The tank turned to rally and headed back under heavy shellfire,
the tank was hit twice en route.
3 crew were wounded ,
one by shellfire 2 by MGs 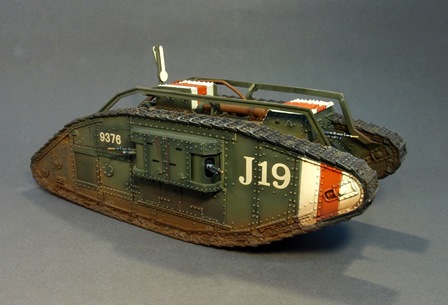 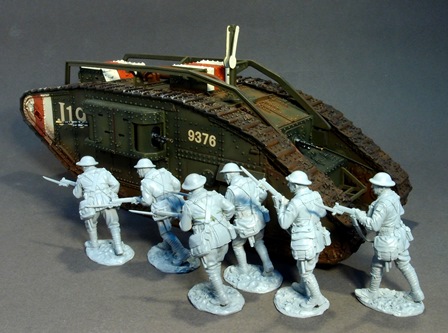