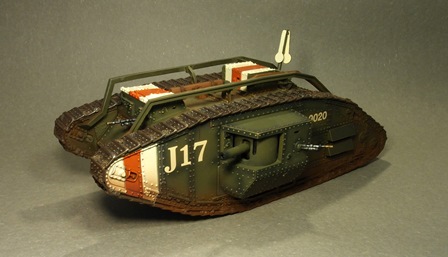 The Mark V was first used in the Battle of Hamel on 4 July 1918,
when 60 tanks contributed to a successful assault by Australian units on the German lines.
It went on to take part in eight major offensives before the end of the War.
Canadian and American troops trained on Mk Vs in England in 1918,
and the American Heavy Tank Battalion (the 301st)
took part in three actions on the British Sector of the Western Front in late 1918.
During the Battle of Amiens in August 1918, 288 Mark V tanks,
along with the new Whippet and Mk V*,
penetrated the German lines in a foretaste of modern armoured warfare.

Details of J17 Action taken from ,Battle History Sheets in PRO WO 95-103

"J17 was in action for 3 ½ hours and fired 70 rounds 6 pdr,
500 rounds SAA. Advanced along Bray Corbie Road,
went through enemy barrage in j18d.2.1.
Met infantry in k19b and then swung to right of road
and fired case shot to silence enemy MGs hidden in the wheat.
Met J18and J29 and headed for the Brickyard in k16.
Reached k14 then fired on by MG fire from half left,
tank turned to engage but had difficulty locating enemy in mist.
Eventually an enemy MG opened fire from 50yds,
some bullets penetrated the one,
one killed the driver.
The 6 pdr gunners silenced the enemy MG crew who fled down a communication trench,
the tank waited for the infantry and ran over several MGs whilst doing so.
The tank followed the communication trench towards k10b cleared up an MG post there and moved towards the Bray Morlancourt Road,
where the tank stayed for half an hour mopping up trenches whilst the infantry consolidated. The tank then rallied. " 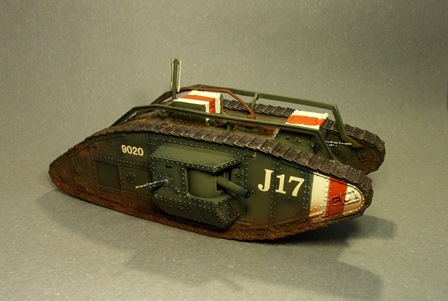 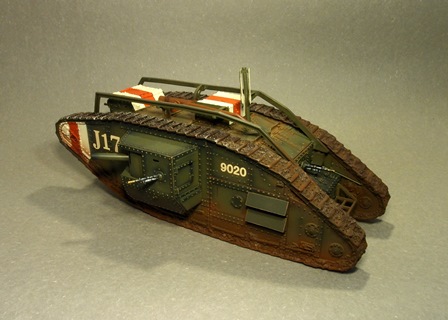