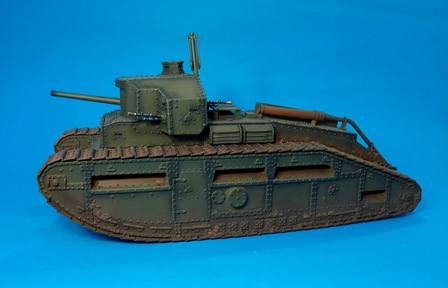 
It was planned that by 1919
the Tank Corps were to receive no less than 6,000 Medium C tanks,
a third of which were to be of a "Male" version,
with a long six-pounder gun in the front of the superstructure.
Though drawings were prepared nothing would come of this "Male" version.
The "MALE" tank, was a category of tank prevalent in World War 1,
which featured heavier armament,
such as the long six-pounder gun.

The "FEMALE" tank featured multiple machine guns instead of the heavier armament
seen on the much more common "MALE" tanks.
As such, female tanks were normally cast in an anti-infantry role.
"Female" tanks were therefore also lighter than "males".
By the end of World War I tank technology had developed, particularly in British tanks,
to a point where it was decided that tanks should be both male and female
(i.e. with both heavy armament and lighter machine guns).
This has become the standard model for tank designs since World War I
and since then the terms "male" and "female" have been disused.

When the war ended all orders were cancelled with only 36 Medium C "Hornet",
Female vehicles nearly finished.
These were to be completed together with fourteen others built from
pre-produced parts for a total production of fifty tanks.

No Medium C's were sent either with the Expedition Forces
against the Bolsheviks in Russia or to the Anglo-Irish War.
The only tanks participating in the 1919 victory parade were four Medium C's.
The only "action" the tank ever saw was putting down labour unrest in Glasgow,
following the rioting known as the Battle of George Square in 1919.

From 1925 on, the Medium C was gradually replaced by the Medium Mark I and Medium Mark II.
Proposals to use Medium Cs as recovery vehicles were rejected.
A single vehicle was used to test a new type of transmission.

In 1940 the last remaining Medium C was melted down. 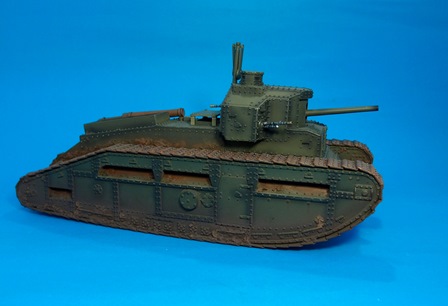