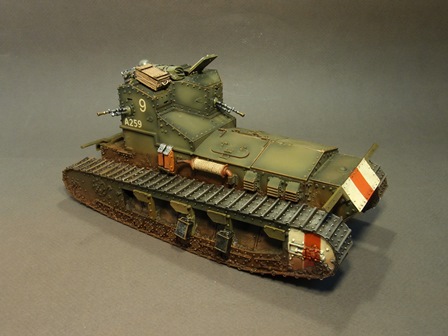 At Bapaume,
on the 28 August 1918 the Whippet"Caeser II" was under the command of Lt C.H.Sewel ,
who was to be awarded the V.C. He dismounted from his tank
to rescue the crew of another Whippet that had overturned and caught fire,
he succeeded ,but was killed in the process and awarded a posthumous Victoria Cross for his bravery.
There are five surviving Whippets today.
A 259, Caesar II survives at Bovington Tank Museum, Dorset, Britain, UK 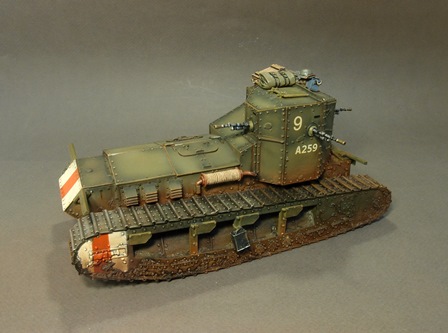 This officer displayed the greatest gallantry and initiative
in getting out of his own tank and crossing open ground,
under heavy shell and machine gun fire,
to rescue the crew of another Whippet of his section,
which had side slipped into a large shell hole,
overturned and taken fire.
The door of the tank having become jammed against the side of the shell hole,
Lieutenant SEWELL, by his own unaided efforts,
dug away the entrance to the door and released the crew.
In doing so he undoubtedly saved the lives of the officers and men inside the tank,
as they could not have got out without his assistance.
After having extricated the crew,
seeing one of his own crew lying wounded behind his tank,
he again dashed across the open ground to his assistance.
He was hit while doing so,
but succeeded in reaching the tank,
when a few minutes later he was again hit fatally,
in the act of dressing his wounded driver.

During the whole of this period he had been in full view of
and at short range of enemy machine guns and rifle pits,
and throughout, by his prompt and heroic actions,
showed and utter disregard for his own safety.