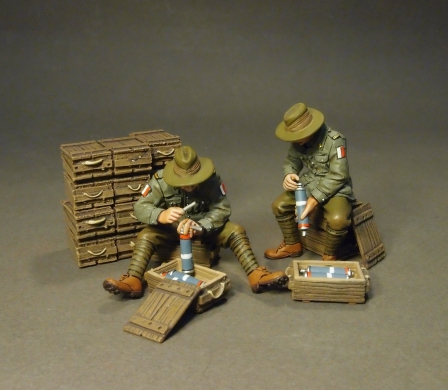 The military mainly used horses for logistical support during the war;
they were better than mechanized vehicles at traveling
through deep mud and over rough terrain.
Horses were used for reconnaissance and for carrying messengers,
as well as pulling artillery, ambulances, and supply wagons.
The presence of horses often increased morale among the soldiers at the front,
but the animals contributed to disease and poor sanitation in camps,
caused by their manure and carcasses.
The value of horses,
and the increasing difficulty of replacing them,
was such that by 1917 some troops were told that the loss of a horse
was of greater tactical concern than the loss of a human soldier.
Ultimately,
the Allied blockade prevented the Central Powers from importing horses to replace those lost,
which contributed to Germany's defeat.
By the end of the war, even the well-supplied U.S. Army was short of horses.

The Stokes mortar was a British trench mortar invented by
Sir Wilfred Stokes KBE that was issued to the British,
Commonwealth and U.S. armies,
as well as the Portuguese Expeditionary Corps (CEP),
during the later half of the First World War.
The 3-inch trench mortar is a smooth-bore,
muzzle-loading weapon for high angles of fire The Stokes mortar was a simple weapon,
consisting of a smoothbore metal tube fixed to a base plate (to absorb recoil)
with a lightweight bipod mount.
When a mortar bomb was dropped into the tube,
an impact sensitive primer in the base of the bomb would make contact with
a firing pin at the base of the tube, and detonate,
firing the bomb towards the target.

The barrel is a seamless drawn-steel tube necked down at the breech or base end.
To the breech end is fitted a base cap,
within which is secured a firing pin protruding into the barrel.
The caps at each end of the bomb cylinder were 81 mm diameter.
The bomb was fitted with a modified hand grenade fuze on the front,
with a perforated tube containing a propellant charge
and an impact-sensitive cap at the rear.
Range was determined by the amount of propellant charge used
and the angle of the barrel.
A basic propellant cartridge was used for all firing,
and covered short ranges.
Up to four additional "rings" of propellant were used for incrementally greater ranges.
See range tables below. The four rings were supplied
with the cartridge and gunners discarded the rings which were not needed.