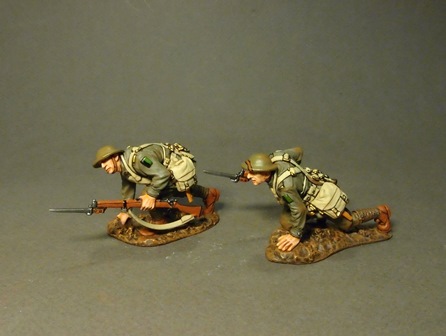 This battalion was the first Australian Infantry unit to be mobilized for service during WW1.
The Unit colour patch was Brown and Yellow.
The 31st Battalion AIF,
was formed from two companies from Queensland,
and two companies from Victoria.
Initially it was deployed in Egypt.
Where it was involved in the defence of the Suez canal,
earning the battle honour, "Egypt 1915-1916".
In 1916, the 31st Battalion was assigned to the 5th Division,
after a reorganization that saw the AIF expanded from two infantry divisions to five.
Its first involvement along the western front was the Battle of Fromelles,
during which it suffered over 500 casualties,
and was so badly mauled it undertook no more offensive action for the rest of that year.
In 1917 it was involved at Polygon Wood, during the battle of Passchendale,
where Private Joseph Bugden,
performed the actions that led him to receiving the Victoria Cross.