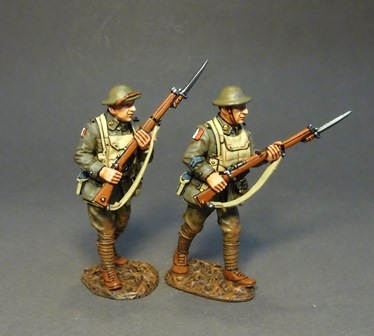 This Battalion was a predominately Victorian unit,
and its colour patches were White and Red.
It was originally raised in 1916, and saw service at the Gallipoli campaign.
It arrived in France on the 28th June, and also took part at the Battle of Fromelles.
The battalion was to suffer 757 casualties, and was almost destroyed.
They were to spend the next two and half years taking part in several significant actions.

They were to take part in the Battle of Amiens on 8th August 1918.
In September 1918, with the AIF suffering considerable
manpower shortages due to the heavy losses and insufficient replacements,
one battalion in each brigade was ordered to disband to provide reinforcements
to the other battalions within the brigade.
Within the 15th brigade, it was the 60th Battalion who were ordered to disband.
The men, however did not wish to be sent to other units and refused to obey the order to disband.
It was only after the highly regarded Brigadier General Howard Elliott had spoken to them, that the men agreed.

The Battalion was subsequently disbanded on 27th September 1918.