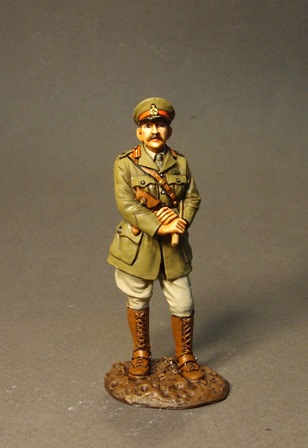 General Sir John Monash GCMG,
KCB, VD (27 June 1865 - 8 October 1931)was a civil engineer who became
the Australian military commander in the First World War.
He commanded the 13th Infantry Brigade before the war and then,
shortly after the outbreak of the war,
became commander of the 4th Brigade in Egypt,
with whom he took part in the Gallipoli campaign.

In July 1916,
he took charge of the new Australian 3rd Division
in northwestern France and in May 1918 he was made commander of the Australian Corps,
at the time the largest corps on the Western Front.

On 8 August 1918 the successful Allied attack at the Battle of Amiens,
which led to the expedited end to the war,
was planned by Monash and spearheaded by British forces
including the Australian and Canadian Corps under Monash and Arthur Currie.
Monash is considered to be one of the best Allied generals of the First World War.

The First Australian Imperial Force (1st AIF)
was the main expeditionary force of the Australian Army during World War I.

It was formed from 15 August 1914,
following Britain's declaration of war on Germany.
Generally known at the time as the AIF,
it is today referred to as the 1st AIF to distinguish from the 2nd AIF which was raised during World War II.
The 1st AIF included the Australian Flying Corps
, which was later renamed the Royal Australian Air Force.

The 1st AIF was a purely volunteer force for the duration of the war.
In Australia, two plebiscites on conscription were defeated,
thereby preserving the volunteer status but stretching the AIF's reserves towards the end of the war.
A total of 331,814 Australians were sent overseas to serve as part of the AIF,
which represented 13% of the white male population.
Of these, 18% (61,859) were killed.
The casualty rate (killed or wounded) was 64%.
About 2,100 women served with the 1st AIF, mainly as nurses.
Close to 20% of those who served in the 1st AIF had been born in the United Kingdom
but all enlistments had to occur in Australia
(there were a few exceptions).
As a volunteer force, all units were demobilized at the end of the war.