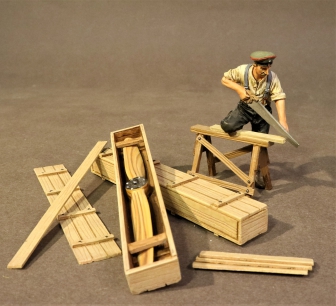 
No squadron could have gotten into the air
if it were not for the very large number of support crews,
which ranged from riggers, mechanics, fitters, and carpenters.

These men were not only assigned to the combat squadrons,
but there were also specific,
"Aircraft Park" units, which were composed of nothing but such support staff.

Some units consisted of entirely nothing else besides lumberjacks
who went into the woods to
find and cut the spruce used to make and repair the aircraft.

The propellers were not carved out of one piece of wood,
but made of thin planks glued together.
This made the result very strong and easy to make with the wood working skills available then.

In Michael Fox's "Knights of the Skiesbook",
he mentions that a BE.2C used during the Somme in 1916 by 15 Sqn.
" in three months it was fitted with no fewer than
eighty new wings and many other components."
Wooden parts which were damaged such as struts,
ribs and propellors could be replaced, usually overnight.
Larger jobs which would take longer meant the plane
would probably be taken to the Airfield park,
where after repair it often found its way to a different squadron.

Small tears and bullet holes in the fabric were one of the most common repair jobs.
With fabric covered machines this could easily be patched.
The dope would first be removed from the fabric around the tear,
or bullet hole,
and a suitable sized patch with serrated or frayed edges would be prepared.
The area would then be re-doped and
the thoroughly doped new patch added and smoothed down.
A second coat of dope and a final coat of pigmented dope would finally be applied.
Larger tears would be stitched together,
or if there was too much damage then
the old fabric would be removed and replaced.

Sometimes patches were not used on bullet holes.
A small cross or roundel was painted over the hole,
which stabilized the threads, and strengthened the fabric.