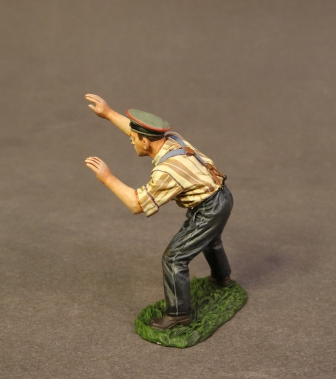 
Many variations of aircraft engine starting have been used
since the Wright brothers made their first powered flight in 1903.
The methods used have been designed for weight saving,
simplicity of operation and reliability.
Early piston engines were started by hand,
with geared hand starting, electrical and cartridge-operated systems
for larger engines being developed between the wars.

Hand starting of aircraft piston engines by swinging the propeller
is the oldest and simplest method,
the absence of any onboard starting system giving an appreciable weight saving.
Positioning of the propeller relative to the‚ crankshaft is arranged
such that the engine pistons pass through top dead centre during the swinging stroke.

As the ignition system is normally arranged to produce sparks before top dead centre
there is a risk of the engine kicking back during hand starting,
to avoid this problem one of the two magnetos
used in a typical aero engine ignition system is fitted with an 'impulse coupling',
this spring-loaded device delays the spark
until top dead centre and also increases the rotational speed of the magneto to produce a stronger spark.
When the engine fires,
the impulse coupling no longer operates and the second magneto is switched on.
As aero engines grew bigger in capacity (during the interwar period),
single-person propeller swinging became physically difficult,
ground crew personnel would join hands and pull together
as a team or use a canvas sock fitted over one propeller blade,
the sock having a length of rope attached to the propeller tip end.
Note that this is different from the manual "turning over" of radial piston engine,
which is done to release oil that has become trapped in the lower cylinders prior to starting,
to avoid engine damage.
The two appear similar, but while hand starting involves a sharp,
strong "yank" on the prop to start the engine,
turning over is simply done by turning the prop through a certain set amount.