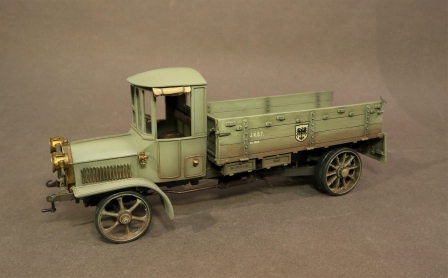 
The First World War spelled the breakthrough as a means of transport for the truck,
both for military use and in private enterprise.

Like the United Kingdom,
Germany entered the First World War with a "Subsidy" system.
Under this system civilian companies were allowed to purchase vehicles
at a lower price provided that they would hand them over to the military in case of war.
Their number, however, remained too low to fulfill the German Army’s needs in 1914.
As a consequence an enormous variety of civilian trucks were impressed
into military service when the war started.
However, in the coming years of war,
this variety mostly vanished,
as many trucks were used up in the daily grind
and the army could order more unified military trucks.
On the average some 25,000 trucks
were in German Army service at any single day during the war.

During the war about 40,000 new trucks were manufactured between 1914-1918.
One of the "Subsidy" truck designs that was kept in production
throughout the war was made by Daimler Marienfelde
(Marienfelde was the location of the Daimler factory).
The truck was of modern design and went into production in 1914.
It was used extensively wherever the German Army went.
Technically it was a 3-ton truck with chain drive,
using a 4-cylinder gasoline engine which gave it a maximum speed of some 30 km/h.
Over 3,000 of these trucks were built between 1914-18.

Multiple period photos exist showing aircraft being transported on these lorries and towed behind.

Many of these trucks survived the war and were used by
civilian companies or the German Reichswehr Army during the twenties and thirties,
with pneumatic tires replacing the old solid ones.