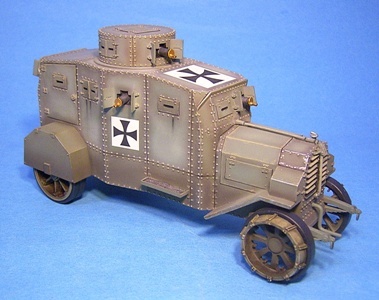 The E-V/4 Panzerkraftwagen Ehrhardt
was one of the first examples
of a typeof high and flatsided armoured car design
that the Germans used almost until
the start of the Second World War for internal policing duties.
It weighed nearly 9 tons, had a crew of eight or nine,
and carried an armament of up to three machine-guns.
In 1915 the German Army decided to produce an armoured car,
but without any practical experience they approached
the car manufacturing companies Ehrhardt, Daimler and Büssing,
and ordered a prototype armoured car from each.

During 1915, the three companies produced the ordered prototypes.
In all three cases, the three prototypes were massive vehicles,
the largest of which was the Büssing.
The Ehrhardt and Daimler designs were very similar.
Both placed the engine in the front, surrounded by armour,
and had a large box-like body at the rear with a turret on the top.
Both sported a clumsy appearance,
and was far too heavy for the effective fulfillment
of the operational tasks the German Army demanded of them.

The Daimler and Ehrhardt prototypes
were both reliant on the use of double wheels on each side of the rear,
and had flanges on the single wheels at the front of the vehicle,
in an effort to reduce ground pressure
and so enhance the cross-country mobility of the vehicle to a useful degree.
All three cars had a crew of eight or nine men,
carried an armament of at least three machine guns,
and possessed a maximum armour thickness of 9 mm.