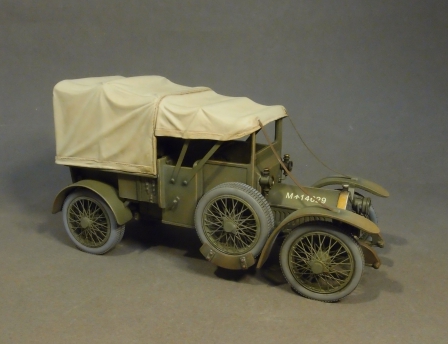 At the outbreak of hostilities in August 1914
Crossley Motors moved almost totally to war production.
The only model made was the 20/25 which was supplied
to the forces in huge numbers with production running at up to 45 a week.
The first had been supplied to the Royal Flying Corps (RFC)
in 1913 and at the outbreak of war they had 56.
By the time of the armistice this had risen to over 6000.

Every squadron in the RFC was supposed to be equipped with nine Tenders
and one Staff Touring Car but it seems likely that most never had the full complement.
Vehicles went to France, Belgium, Mesopotamia,
Salonica, Egypt, Russia, India and several parts of Africa.

The 34 cwt Tender had room for eleven men,
three in front with the remainder facing each other on bench seats down each side of the rear.
Weather protection was by two hoods, one for the front and one for the rear.

After the war the 20/25 continued in use by the RAF
for several years and saw service in Iraq, Persia and India.

The 20/25 model was also the first vehicle
to be supplied to London's Metropolitan Police Flying Squad in 1920,
some of which were fitted with radio equipment.