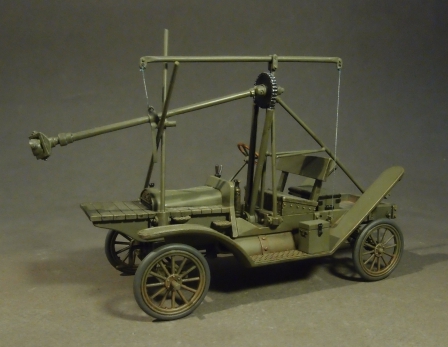 
A Hucks Starter is an auxiliary power unit, almost always a motortruck,
that provides initial power to start up piston aircraft engines.
Such Hucks starter trucks can be considered a mechanical replacement
for a member of the groundcrew who would have spun an aircraft's propeller by hand.
This is because of the starter truck's position in front of the airplane when starting,
much like a groundcrew member,
and were commonly used when aircraft engines became too large to be easily started by hand.

The power is transmitted to the aircraft via a power take-off shaft,
much like those found on the drive trains of rear-wheel drive vehicles,
or agricultural machines.
The shaft of the starter fits into a special protruding hub incorporating
a simple projecting claw clutch on the center of the airplane's propeller assembly.
When engaged, the power of the truck's engine is transmitted to the aircraft engine until start up,
whereupon the faster speed of the now-running engine disengages the clutch,
and then the starter truck clears the area prior to take-off.
The device was named after its inventor Bentfield Hucks,
who was a captain in the Royal Flying Corps at the time.
In the Royal Air Force service,
Hucks Starters were based on Ford Model T trucks,
which were in widespread use and familiar to ground crew.

The Huck Starter with 2 crew. The crew figures will be available at a later date.