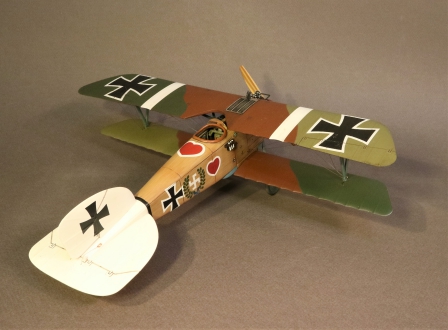 
The Albatros D.III was a biplanefighter aircraft used by
the Imperial German Army Air Service (Luftstreitkräfte) during World War I.
A modified licence model was built by Oeffag for the Austro-Hungarian Air Service (Luftfahrtruppen).
It was the preeminent fighter during the period of German aerial dominance known as "Bloody April" 1917.

Following the successful Albatros D.I and D.II series,
the D.III utilized the same semi-monocoque,
plywood-skinned fuselage.
However, at the request of the Idflieg (Inspectorate of Flying Troops),
the D.III adopted a sesquiplane wing arrangement broadly
similar to the French Nieuport 11.
The upper wingspan was extended,
while the lower wing was redesigned with reduced chord and a single main spar.
"V" shaped interplane struts replaced the previous parallel struts.
For this reason, British aircrews commonly referred to the D.III as the "V-strutter."

The D.III entered squadron service in December 1916,
and was immediately acclaimed by German aircrews
for its maneuverability and rate of climb.
Two faults with the new aircraft were soon identified.
Like the D.II, early D.IIIs featured
a Teves und Braun airfoil-shaped radiator
in the center of the upper wing,
where it tended to scald the pilot if punctured.
From the 290th D.III onward,
the radiator was offset to the right on production machines
while others were soon moved to the right as a field modification.
Aircraft deployed in Palestine used two wing radiators,
to cope with the warmer climate.

Albatros built approximately 500 D.III aircraft at its Johannisthal factory.
In the spring of 1917, D.III production shifted to Albatros' subsidiary,
Ostdeutsche Albatros Werke (OAW),
to permit Albatros to concentrate on development and production of the D.V.
Between April and August 1917,
Idflieg issued five separate orders for a total of 840 D.IIIs.
The OAW variant underwent its Typenprufung in June 1917.
Production commenced at the Schneidemühl factory in June and continued through December 1917.
OAW aircraft were distinguishable by their larger, rounded rudders.

Werner Voss, during his period with Jasta Boelcke,
flew this highly decorated Albatros DIII.
Whilst the cowling remained grey,
the nose on Voss's plane was painted red,
which was common for almost all the planes in Jasta 2.
The plywood fuselage had a red heart ,
edged white, similar to a Valentine's Day chocolate box on each side,
and later a third heart was painted on the top of the fuselage.
Also on each side of the plane ,
a white swastika surrounded by an olive wreath was painted.
This was considered a sign of good luck or fortune,
and was a common symbol
which could be found on many planes from almost every nation during WW1.
Werner Voss (13 April 1897 - 23 September 1917) was a World War I
German flying ace credited with 48 aerial victories.
By 6 April 1917, Voss had scored 24 victories and awarded
Germany's highest award, the Pour le Meite.
The medal's mandatory month's leave removed Voss
from the battlefield during Bloody April;
in his absence, Richthofen scored 13 victories.
Nevertheless, Richthofen regarded Voss as his
only possible rival as top scoring ace of the war.
His last flight came on 23 September 1917,
just hours after his 48th victory.
After he fell in solo opposition to eight British aces,
he was described by his preeminent foe,
James McCudden, as "the bravest German airman.

Von Richthofen and most other German aces won the majority of their victories on the D.III,
and it even turned out to be more successful than its alleged successor,
and continued in production for several months after the introduction of the D.V.
Peak service was in November 1917,
with 446 aircraft on the Western Front.
1,866 Albatros D.III planes were produced.
The D.III did not disappear with the end of production,
however. It remained in frontline service well into 1918.
As late as March 1918, there were still nearly 200 D.IIIs
in service on the Western Front, eight months even after the introduction of its successor.