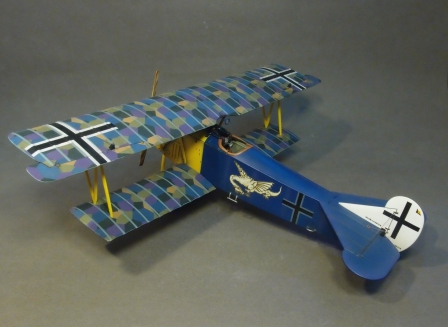 
The Fokker D.VII was a German World War I
fighter aircraft designed by Reinhold Platz of the Fokker-Flugzeugwerke.
Germany produced around 3,300 D.VII aircraft in the second half of 1918.
In service with the Luftstreitkräfte,
the D.VII quickly proved itself to be a formidable aircraft.
The Armistice ending the war specifically required Germany to surrender all D.VIIs to the Allies.

This aircraft was flown by Wilhelm Leusch and featured
a fire breathing dragon on the fuselage inspired by an Unterberg & Helme company advertisement.
Leusch was made commander of Jasta 19 in October 1918 and scored 5 victories.
He was only 29 when he died in a glider accident in August 1921.

Royal Prussian Jagdstaffel 19 was founded on 25th October 1916,
and was designated a "Hunting Group",
(i.e. a fighter squadron) It flew its first combat patrols five days before Christmas, 1916.
The new Jasta drew first blood on 6 April 1917,
credit being given to Leutnant Walter Böning.
On 2 February 1918,
Jasta 19 was detailed into Jagdgeschwader II along with Jasta 12,Jasta 13, and Jasta 15.
The unit would score 92 verified aerial victories,
including ten wins over enemy observation balloons.
In turn, their casualties for the war would amount to eleven pilots killed in action,
four wounded in action,
and one taken prisoner of war Jasta 19 commander,
Lt. Oliver von Beaulieu-Marconnay,
was killed in action and superceded by Ltn R Wilhelm Leusch in October 1918.
He led Jasta 19 until the end of the war, while the unit was based in Trier.

The overall paint scheme is typical of Jasta 19 markings,
when the yellow nose was representative,
while the blue fuselage was the Jagdgeschwader II marking.
Jagdgeswader II units were Jasta 12 with a white nose,
Jasta 13 with a green nose,
Jasta 15 with a red nose and the already noted yellow nose of Jasta 19.