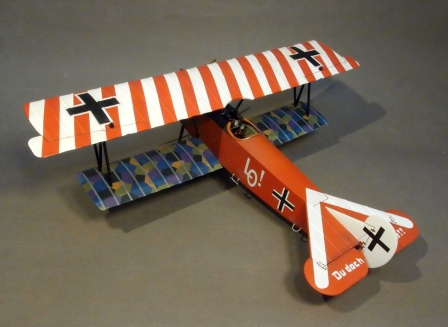 
The Fokker D.VII was a German World War I
fighter aircraft designed by Reinhold Platz of the Fokker-Flugzeugwerke.
Germany produced around 3,300 D.VII aircraft in the second half of 1918.

In service with the Luftstreitkräfte,
the D.VII quickly proved itself to be a formidable aircraft.
The Armistice ending the war specifically required Germany to surrender all D.VIIs to the Allies.

Ernst Udet (26 April 1896 – 17 November 1941)
was the second-highest scoring German flying ace of World War I.
He was one of the youngest aces and was the highest scoring
German ace to survive the war (at the age of 22).

His 62 confirmed victories were second only to Manfred von Richthofen,
his commander in the Flying Circus.
Udet rose to become a squadron commander under Richthofen, and later under Hermann Göring.

The D-VII entered squadron service about the time Udet took over Jasta 4.
It was easier to handle than contemporary enemy aircraft and performed well compared to them,
and it did not have the Albatros' tendency to have the wings rip off in a hard dive.

During the spring and early summer of early 1918,
Udet’s score rose to 35. The charmed life of this German Ace was again apparent
when he took off on the morning of June 29 to intercept a French Bréguet two-seater,
which was directing artillery fire over the lines.
A few days before, in a fit of arrogance and impertinence,
Udet had had his Fokker painted with a candy-striped upper wing and a red fuselage
with ‘Lo’–the nickname of his girlfriend Lola Zink–written on it in big white letters.
On the tail was the phrase,
‘Du doch nicht!‘ (‘Certainly not you!’), a taunt and challenge to Allied pilots.

Udet approached the Bréguet with great skill and precision.
He fired at the observer, who sank into his cockpit.
Now Udet casually swung around for a side shot at the helpless Bréguet,
targeting the engine and pilot.
Suddenly the observer sprang up and manned his machine gun, sending a blistering spray of bullets into Udet’s Fokker,
damaging his machine gun and gas tank and shredding the controls.
Udet reared away but soon found that his plane was crippled–it would only fly in circles.
By accelerating whenever he pointed eastward,
Udet slowly began working his way back to the German lines.

Suddenly the Fokker nosed down into a spin from which Udet could not pull out.
He was wearing one of the new Heinecke parachutes that German pilots were just being equipped with,
and he stood up in the cockpit to jump.
As he did so, a rush of wind knocked him backward.
But instead of tumbling into the wide-open sky,
Udet to his horror realized that his parachute harness was caught on the rudder.
Frantically, he struggled with the harness as the earth spun closer.
With a final superhuman effort he yanked himself free and floated down into no man’s land.
He quickly scrambled back to the German lines and,
taking his harrowing experience in stride,
was flying again that same afternoon.
The next day he shot down a Spad fighter for his 36th victory.