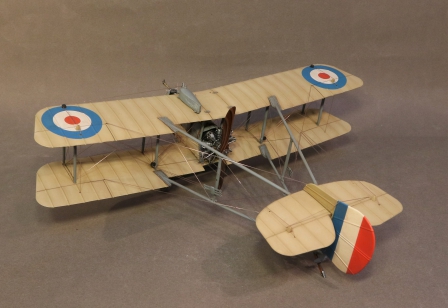 
The Airco DH.2 was a single-seat biplane "pusher" aircraft
which operated as a fighter during the First World War.
It was the second pusher design by Geoffrey de Havilland for Airco,
based on his earlier DH.1 two-seater.
The DH.2 was the first effectively armed British single-seat fighter
and enabledÂ Royal Flying Corps (RFC)
pilots to counter the "Fokker Scourge"
that had given the Germans the advantage in the air in late 1915.
Until the British developed a synchronisation gearÂ to match the German system,
pushers such as the DH.2 and theÂ F.E.2b
carried the burden of fighting and escort duties.

The No.14 Squadron operated DH-2’s
against the Ottoman Turks in Palestine during 1917.
By this time the DH-2 was basically obsolete
and no longer considered suitable for combat operations in France
. The planes for the No. 14 squadron
remained with their clear doped linen finish
and metal surfaces painted a medium grey,
as the pale tan colour
was more appropriate to the near desert conditions.

This model is depicted as an early production DH-2
as it is equipped with a gravity fuel tank
mounted above the wing on the port side,
and has a two bladed propeller.

**PLEASE NOTE THAT DUE TO THE STRUCTURAL POSITION
OF THE UNDERCARRIAGE THE NORMAL FLIGHT STAND SCREWS AND WASHERS WILL NOT BE SUITABLE.
A SPECIAL NEW LONGER SCREW AND WASHER WILL BE INCLUDED IN EACH SET.
THESE CAN BE USED WITH ANY OF THE FLIGHT STANDS.