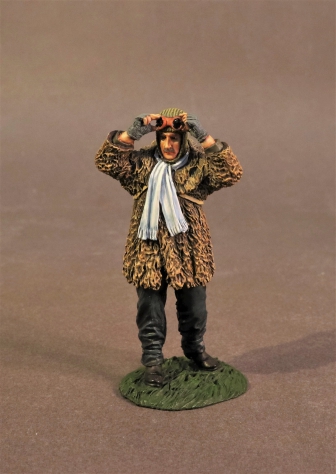 
Lanoe George Hawker, VC, DSO (30 December 1890' 23 November 1916)
was a British flying aceÂ of theÂ First World War.
Having seven credited victories,
he was the third pilot to receive theÂ Victoria Cross,
the highest decoration for gallantry awarded to British
and Commonwealth servicemen.
He was killed in a dogfight with the famous German flying ace
Manfred von RichthofenÂ ("The Red Baron"),
who described him as "the British Boelcke".

Following an initial air victory in June,
on 25 July 1915 when on patrol over Passchendaele,
Captain Hawker attacked three German aircraft in succession,
flying a differentÂ Bristol Scout C, serial No. 1611,
after his earlier No. 1609 had been written off, transplanting the custom Lewis gun mount onto No. 1611.
The first aerial victory for Hawker that day occurred
after he had emptied a complete drum of bullets
from his aircraft's single Lewis machine gun into it,
went spinning down. The second was driven to the ground damaged,
and the third- an Albatros C.I of FFA 3-
which he attacked at a height of about 10,000 feet,
burst into flames and crashed.
(Pilot Oberleutnant Uebelacker and observer HauptmannÂ RoserÂ were both killed.)
For this feat he was awarded theÂ Victoria Cross.

It has since been argued that shooting down three aircraft
in one mission was a feat repeated several times by later pilots,
and whether Hawker deserved his Victoria Cross has been questioned.
However, in the context of the air war of mid-1915
it was unusual to shoot down even one aircraft,
and the VC was awarded on the basis that all the enemy planes were armed with machine guns.
More significantly, by the early summer of 1915,
the GermanÂ Feldflieger Abteilung two-seater observation
units of the futureÂ Luftstreitkräfte,
had by this time, received examples of the Fokker EindeckerÂ monoplane,
with one Eindecker going to each unit, with a fixed,
forward-firing machine gun fitted with a "synchronization gear"
that prevented the bullets from striking the propeller.
The first claim using this arrangement,
though unconfirmed by the German Army,
was byÂ LeutnantÂ Kurt Wintgens on 1 July 1915,
some 225 miles (362 km) over Lunéville distant from
where Hawker had his three-victory success nearly a month later.
Therefore, the German pilots like Wintgens
andÂ Leutnant Otto Parschau, another pioneering Eindecker pilot,
could employ the simple combat tactic of aiming the whole aircraft,
and presenting a small target to the enemy while approaching from any angle,
preferably from a blind spot
where the enemy observer could not return fire.

Hawker flew before Britain had any workable synchroniser gear,
so his Bristol Scout had its machine gun mounted
on the left side of the cockpit,
firing forwards and sideways at a 45 degree angle to avoid the propeller.
The only direction from which he could attack an enemy
was from its right rear quarter-precisely in a direction from
which it was easy for the observer to fire at him.
Thus, in each of the three attacks,
Hawker was directly exposed to the fire of an enemy machine gun.

On 23 November 1916, while flying an Airco DH.2 (Serial No. 5964),
Hawker left Bertangles Aerodrome at 1300 hours as part of 'A' Flight,
led by Capt J. O. Andrews and including Lt (later AVM)Â R.H.M.S Saundby.
Andrews led the flight in an attack on two German aircraft over Achiet.
Spotting a larger flight of German aircraft above,
Andrews was about to break off the attack,
but spotted Hawker diving to attack.
Andrews and Saundby followed him to back him up in his fight;
Andrews drove off one of the Germans attacking Hawker,
then took bullets in his engine
and glided out of the fight under Saundby's covering fire.
Losing contact with the other DH-2's, Hawker
began a lengthy dogfight with anÂ Albatros D.IIflown
by Leutnant Manfred von Richthofen of Jasta 2.
The Albatros was faster than the DH2, more powerful
and with a pair ofÂ lMG 08 machine guns, more heavily armed.
Richthofen fired 900 rounds during the running battle.
Running low on fuel, Hawker eventually broke away from the combat
and attempted to return to Allied lines.
The Red Baron's guns jammed 50 yards from the lines,
but a bullet from his last burst struck Hawker
in the back of his head, killing him instantly.
His plane spun from 1,000 ft (300 m)
and crashed 200 metres (220 yards) east of Luisenhof Farm,
just south of Bapaume on the Flers Road,
becoming the German ace's 11th victim.
German Grenadiers reported burying Hawker 250 yards (230 metres)
east of Luisenhof Farm along the roadside.