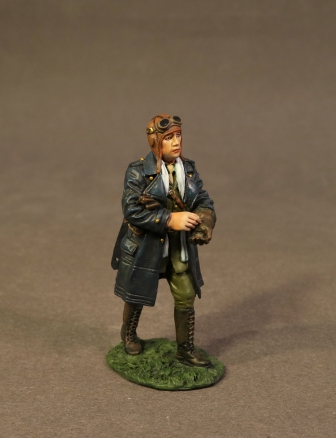 Raymond Collishaw, one of Canada's most decorated fighter pilots,
was the third top-scoring allied ace of WW1-surpassed only
by the famed Billy Bishop and Edward Mannock.
Collishaw ended the war with 60 victories,
the third highest of the British Empire pilots.
He remained in the Royal Air Force after the war and served in other combat arenas,
including commanding the British forces against the Bolsheviks
in Russia and the allied air forces in North Africa during World War II.

By the end of May 1916,
the Royal Flying Corps was badly in need of reinforcements,
much due to the after-effects of Bloody April.
As a result, Collishaw was posted to his previousÂ No.
10 Naval Squadron as a flight commander.
Collishaw's "B" Flight would be composed entirely of Canadians.
Although British commanders had strongly discouraged pilots painting their aircraft,
Collishaw's flight painted their Sopwith Triplanes black
(though appearing dark brown),
and called themselves the All-Black Flight,
later known more simply as the Black Flight

During their first two months they claimed a record 87 German aircraft
destroyed or driven down-which, strangely enough,
brought Collishaw and the unit no wide publicity,
though garnered a great deal of renown among their German opponents in the area.
Collishaw later claimed that this was
because officials in the regular Royal Flying Corps were loath to give credit to naval pilots.
June 6, 1917 was their grandest day.
They were flying offensive patrols with 10 Triplanes.
Collishaw was leading a patrol when they came across an Albatros 2-seater escorted
by 15 Albatros and Halberstadt fighters.
In the "fur ball" that ensued Collishaw dropped three Albatros's,
Nash downed an Aviatik two-seater and an Albatros,
Reid downed a Halberstadt scout,
Sharman and Alexander each downed an Albatros.
In total the RNAS shot down 10 German aircraft without any losses.