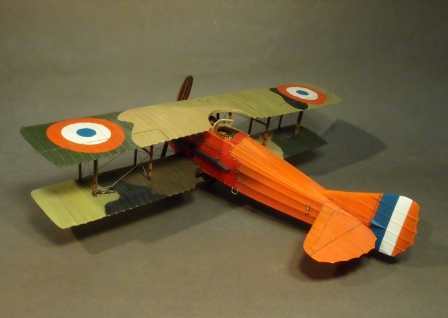 
The SPAD S.XIII was a French biplane fighter aircraft of World War I,
developed by Société Pour L'Aviation et ses Dérivés (SPAD) from the earlier highly successful SPAD S.VII.
It was one of the most capable fighters of the war, and one of the most-produced,
with 8,472 built and orders for around 10,000 more cancelled at the armistice.

Madon was born in Bizerte,
Tunisia and was athletic from an early age.
He was short but had an erect stance, and was exceptionally strong.
He boxed and played football.
His desire to fly led him to attempt to become a pilot for the Ottoman Empire.
When that failed, he enlisted in the First Engineering Regiment in Versailles, and ended up as a cook.

He repeatedly requested pilot's training.
Madon was initially assigned to Escadrille BL30,
where he flew reconnaissance missions in Bleriots.
He also flew some of the first night-time bombing missions of the war.
Madon was already a very experienced pilot,
and this served him well when he was hit by a 77mm shell on October 30, 1914.
He managed to perform a dead stick landing against the wind,
but behind the French lines.

He was appointed to command Escadrille Spa38,
which was re-equipped with new Spad XIIIs.
Although principally a photo reconnaissance unit,
Spa38 aggressively defended itself.
They lived up to the motto they adopted from their commander:
"Whoever rubs against me gets pricked".
They also adopted his black thistle insignia on their planes.

He mentored other pilots who became aces because of his tutelage;
among these were Andre Martenot de Cordou,
Hector Garaud, and American David Putnam.

By war's end, he was credited with 41 confirmed victories and 64 probables.
About the latter, he once nonchalantly remarked:
"The Boche knows his losses." His score of 41 still ranked him fourth among all French pilots

To make himself more easily identifiable to his men,
G. F. Madon painted the fuselage and tail of his aircraft red.
One of his SPAD XIII had an all-red fuselage and white radiator cowl.