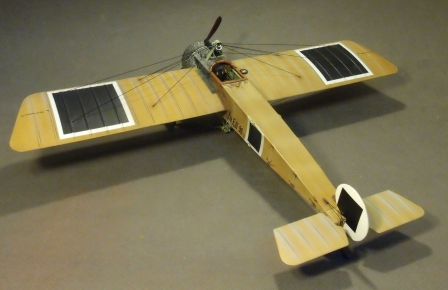 
The Fokker E.III was the main variant of the Eindecker (monoplane)
fighter aircraft of World War I.
It entered service on the Western Front in December 1915
and was also supplied to Austria-Hungary and Turkey.

The E.III was the first type to arrive in sufficient numbers to form small specialist fighter units,
Kampfeinsitzer Kommandos (KEK) in early 1916.
Previously, Eindeckers had been allocated singly,
just as the E.I and E.II had been,
to the front-line Feldflieger Abteilungen that carried out reconnaissance duties.
On 10 August 1916,
the first German Jagdstaffeln (single-seat fighter squadrons) were formed,
initially equipped with various early fighter types,
including a few E.IIIs,
which were by then outmoded and being replaced by more modern fighters.
Standardisation in the Jagdstaffeln (and any real success)
had to wait for the availability in numbers of the Albatros D.I and Albatros D.II in early 1917.

Square markings weren't applied to Ottoman aircraft until April 1916.
Hans J. Buddecke's Fok.E.III 96/15
was in standard Fokker Factory finish of clear doped unbleached linen fabric,
with a clear varnish top coat to waterproof the fabric.
The Iron Crosses and white cross field were over painted black leaving
a 50 mm wide white square border in all six places,
On the rudder the cross was over painted black forming a square.
This was with Fliegerabteilung 5, located at Smyrna Airfield, Turkey, around April 1916.
It is written that Buddeke refers to his aircraft
in his book El Schahin as " my yellow bird with the black threatening eyes".

The E.III piloted by Hauptmann Hans-Joachim Buddecke
was the aircraft used by the German pilot when he was sent to Gallipoli,
in Turkey, to fight with Ottoman FA 6 (6 Bölük, Kuvva-i Havvaie)
against the Royal Naval Air Service,
from December 1915 to August 1916.
There he performed a successful campaign,
with four victories confirmed and seven unconfirmed.
Credited with thirteen victories,
Buddecke saw combat also in Bulgaria and on the Western Front and he was the third ace,
after Max Immelmann and Oswald Boelcke, to earn the Pour le Mérite medal.

In late August 1916 was recalled to the Western Front
as leader of the newly formed Royal Prussian Jagdstaffel 4.
There he reached other three victories in September 1916.
After that he went back to Turkey, joining the Ottoman FA5,
and scored two victories in Smirne by March 1917.
In early 1918, he was again in France with the Jasta 30,
and following was assigned to Royal Prussia Jagdstaffel 18.
He was killed in action on 10 March 1918, during an aerial combat over Lens, France.