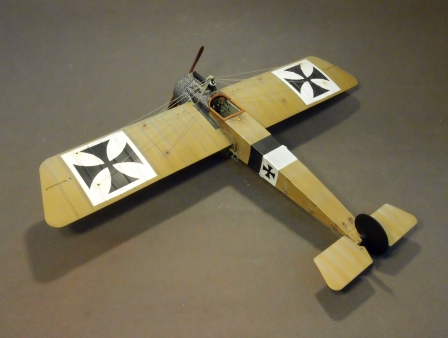 
The FOKKER EI armed models started shipping to front line units in June 1915.
Although initially armed with a Parabellum LMG 14,
they were soon re-fitted with the IMG 08 "Spandau".
The 100hp Oberursel U.1 powered EII was developed concurrently
with the EI and started entering service in July 1915.
in April 1915,
the Eindecker ("Monoplane") was the first purpose-built
German fighter aircraft and the first aircraft to be fitted with synchronizer gear,
enabling the pilot to fire a machine gun through the arc of
the propeller without striking the blades.
The Eindecker granted the German Air Service
a degree of air superiority from July 1915 until early 1916.
This period was known as the "Fokker Scourge",
during which Allied aviators regarded their poorly armed aircraft as "Fokker Fodder".
The Eindecker was based on Fokker's unarmed A.III scout
(itself following very closely the design of the French Morane-Saulnier H shoulder-wing monoplane)
which was fitted with a synchronizer mechanism controlling a single Parabellum MG14 machine gun.

Anthony Fokker personally demonstrated the system on 23 May 1915,
having towed the prototype aircraft behind his touring car to a military airfield near Berlin.