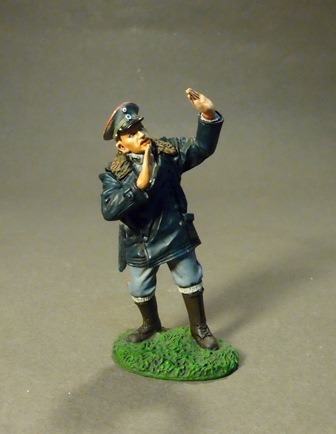 
Immelmann was the first pilot to be awarded the Pour le Mérite,
Germany's highest military honour,
receiving it on the day of his eighth win,
12 January 1916.
The medal became unofficially known as the "Blue Max" in the German Air Service in honor of Immelmann.
His medal was presented by Kaiser Wilhelm II on 12 January 1916.
Oswald Boelcke received his medal at the same time
Many Germans believed Immelmann was invincible,
and his death was a huge shock.
It is believed that his aircraft's gun synchronisation
(designed to enable his machine gun to fire between the whirling propeller blades without damaging them)
had malfunctioned with catastrophic results.

Damage to the propeller resulting in the loss of
one blade could have been the primary cause of the structural
failure evident in accounts of the crash of his aircraft.
The resultant vibration of an engine at full throttle spinning
half a propeller could have shaken the fragile craft to pieces
As with most pilots,
Max was devoted to his pet dog, Tyras, who often slept within or on his bed.
He didn't smoke or drink and wrote daily to his mother.