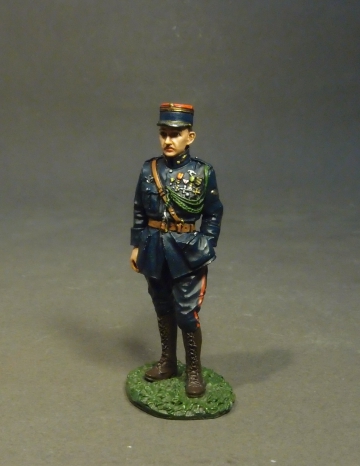 
GEORGES GUYNEMAR ,
24 December 1894 - 11 September 1917 missing,
was a top fighter ace for France with 54 victories during World War I,
and a French national hero.
Guynemer was lionized by the French press and became a national hero.
The French government encouraged the publicity to boost morale and
take the people's minds off the terrible losses in the trenches.
Guynemer was embarrassed by the attention,
but his shyness only increased the public's appetite to know everything about him.

Guynemer's death was a profound shock to France; nevertheless,
he remained an icon for the duration of the war.
Only 22 at his death,
he continued to inspire the nation with his advice, "Until one has given all, one has given nothing."

Guynemer started flying this machine in late July,
and went on to score his 53rd victory on 20th August 1917.
Unfortunately this was the plane in which Guynemer was to mysteriously go missing in, on 11th September 1917.

Guynemer failed to return from the combat mission on 11 September 1917.
At 08:30, with rookie pilot Jean Bozon-Verduraz,
Guynemer took off in his Spad XIII S.504 nº2. His mission was to patrol the Langemark area.
At 09:25, near Poelkapelle,
Guynemer sighted a lone Rumpler, a German observation plane,
and dove toward it.
Bozon-Verduraz saw several Fokkers above him, and by the time he had shaken them off,
his leader was nowhere in sight,
so he returned alone. Guynemer never came back.

It was a French journalist who explained to schoolchildren,
"Captain Guynemer flew so high he could not come down again."