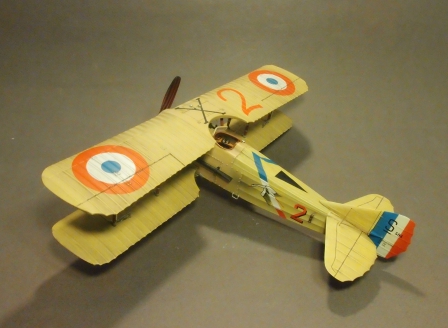 
The SPAD S.XIII was a French biplane fighter aircraft of World War I,
developed by Société Pour L'Aviation et ses Dérivés (SPAD)
from the earlier highly successful SPAD S.VII.
It was one of the most capable fighters of the war,
and one of the most-produced,
with 8,472 built and orders for around 10,000 more cancelled at the armistice.


Guynemer started flying this machine in late July,
and went on to score his 53rd victory on 20th August 1917.
Unfortunately this was the plane in which Guynemer was to mysteriously go missing in,
on 11th September 1917.

Guynemer failed to return from the combat mission on 11 September 1917.
At 08:30, with rookie pilot Jean Bozon-Verduraz,
Guynemer took off in his Spad XIII S.504 n°2.
His mission was to patrol the Langemark area.
At 09:25, near Poelkapelle,
Guynemer sighted a lone Rumpler, a German observation plane, and dove toward it.

Bozon-Verduraz saw several Fokkers above him,
and by the time he had shaken them off,
his leader was nowhere in sight,
so he returned alone. Guynemer never came back.

It was a French journalist who explained to schoolchildren,
"Captain Guynemer flew so high he could not come down again."