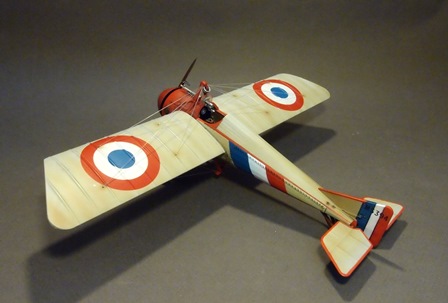 
April 1915,
a German 2 seater plane fell in flames
before the guns of French Ace Roland Garros's monoplane.
This was the beginning of a new technique in aerial warfare.
It was achieved by firing a machine gun
between the blades of a spinning propellor.
Although crude it was successful mainly
due to small steel plates attached to the propellor blades.
The bullets which did not pass between the blades
were deflected by the plates without harming the propellor.
A new degree of accuracy was made possible
by aiming the entire airplane at the target.

The Morane-Saulnier N was
one of the few operational monoplanes of WW1.
It had an extremely sensitive elevator response and
fast landing speed but was considerably more
manouverable than its German opponents at the time.
The Aileron control was achieved by wing warping.

In addition to the french,
2 British squadrons flew Morane-Saulnier N's
where it was nicknamed the "Bullet" due to th large spinner fitted on the nose.

A large metal "casserolle" spinner designed to streamline
the aircraft caused the engines
to overheat because the spinner deflected air away from the engine.
In 1915,
the spinner was removed from the design and no more overheating problems were found.
The removal of the spinner caused very little loss in performance.

The Type N was not particularly successful.
Only 49 aircraft were built and it was quickly
rendered obsolete by the pace of aircraft development.