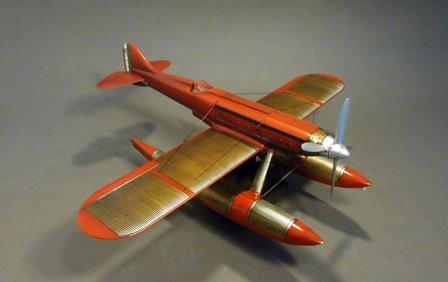 
The Coupe d'Aviation Maritime Jacques Schneider,
commonly called the Schneider Trophy or Schneider Prize
(sometimes it is incorrectly referred to as the Schneider Cup,
which is entirely different prize),
was a trophy awarded annually to the winner of a race for seaplanes and flying boats.
The Schneider Trophy is now held at the Science Museum, South Kensington, London.

Announced by Jacques Schneider,
a financier, balloonist and aircraft enthusiast,
in 1912,
the competition offered a prize of approximately £1,000.
The race was held twelve times between 1913 and 1931.
It was intended to encourage technical advances in civil aviation but became a contest
for pure speed with laps over a (usually) triangular course (initially 280 km, later 350 km).
The contests were staged as time trials,
with aircraft setting off individually at pre-agreed times,
usually 15 minutes apart.
The contests were very popular and some attracted crowds of over 200,000 spectators.
An earlier trophy
, also presented by Jacques Schneider in 1910,
in France, was the Schneider Cup,
which is held in the RAF College Cranwell.

If an aero club won three races in five years,
they would retain the trophy and the winning pilot
would receive 75,000 francs for each of the first three wins.
Each race was hosted by the previous winning country.
The races were supervised by the F&#233dération Aéronautique Internationale
and the aero club in the hosting country.
Each club could enter up to three competitors with an equal number of alternatives.

The race was significant in advancing aeroplane design,
particularly in the fields of aerodynamics and engine design,
and would show its results in the best fighters of WW2.
The streamlined shape and the low drag,
liquid-cooled engine pioneered by Schneider Trophy designs
are obvious in the British Supermarine Spitfire,
the American North American P-51 Mustang, and the Italian Macchi C.202 Folgore.

The Macchi M.C. 72 was an experimental seaplane designed
and built by the Italian aircraft company Macchi Aeronautica.
The M.C. 72 held the world speed record for all aircraft for five years.
In 1933 and 1934,
it set a world speed record·for internal combustion-powered seaplanes which still stands.

The M.C. 72 was built in 1931 with the idea of competing
for what turned out to be the final Schneider Trophy race,
but due to engine problems, the M.C. 72 was unable to compete.

Instead of halting development,
Macchi continued work on the M.C. 72.
Benito Mussolini personally took an interest in seeing development of the M.C.
72 continue and directed state funds to the company.

After 35 flights,
the engines were overhauled in preparation for a record attempt.
The aircraft finally lived up to expectations when it set
a new world speed record (over water) on 10 April 1933,
with a speed of 682 km/h (424 mph).
It was piloted by Warrant Officer Francesco Agello (the last qualified test pilot).
Not satisfied,
development continued as the aircraft's designers
thought they could break 700 km/h (430 mph)
with the M.C. 72.
This feat was in fact achieved on 23 October 1934,
when Agello piloted the M.C. 72 for an average speed of 709 km/h (440 mph) over three passes.
This record remains (as of 2012)
the fastest speed ever attained by a piston-engine seaplane.
After this success,
the M.C.72 was never flown again.

The M.C. 72 held the world speed record for all aircraft for five years.
For comparison,
the record holder for a land-based aircraft was held (for a time)
by the Hughes H-1 Racer with a top speed of only 566 km/h (352 mph).
Then in 1939,
two German racing aircraft passed the M.C. 72.
The first was a Heinkel He 100 which reached the speed of 746 km/h (463 mph).
The second was a Messerschmitt Me 209 which set a new world speed record
of 756 km/h (469 mph) in August - just days before the start of World War II.
The current world speed record for a piston-engine aircraft is 528.33 mph (850.26 km/h)
set by a heavily modified Grumman F8F Bearcat named Rare Bear over three km in 1989.
However, the M.C. 72 record still stands today as the world's fastest propeller-driven seaplane.

The M.C. 72, aircraft that took the world record, survives.
It is on display at the Italian Air Force Museum, near Rome.


** PLEASE NOTE THE MODEL CAN BE DISPLAYED ON ITS OWN TROLLEY,
OR WITH A JJD FLIGHT STAND**