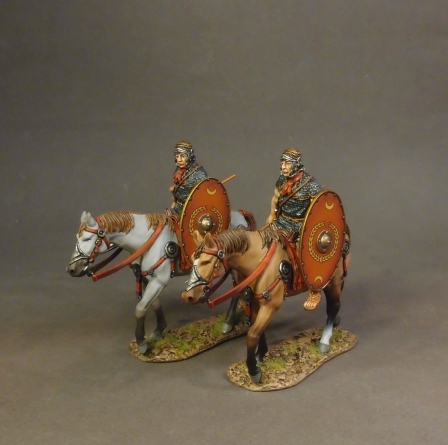 
Roman Auxiliary Cavalry were drawn from a wide range of
warlike peoples throughout the provinces,
especially on the fringes of the empire.
They were generally not citizens of the Roman empire.
These auxilia cavalry provided a powerful fighting arm,
they were well organized, disciplined, and well trained.

The four horned saddle, which was originally of Celtic origin,
was an important part of cavalry equipment.
The four tall horns closed around and gripped the riders thighs,
but did not inhibit free movement ,
which was especially important to spear armed horsemen.
In an age which did not have the stirrup,
the adoption of the four horned saddle allowed the horsemen
to launch a missile effectively,
or use both hands confidently to wield a shield and sword, during a melee.