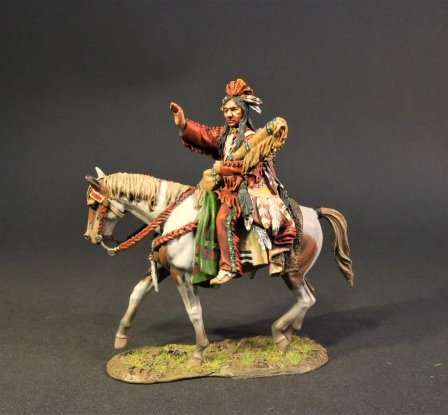 A mountain man was an explorer who lived in the wilderness.
They were instrumental in opening up the various Emigrant Trails
(widened into wagon roads) allowing Americans in the east to settle the new territories of the far west
by organizedÂ wagon trains traveling over roads explored and in many cases,
physically improved by the mountain men and the big fur companies originally to serve the mule train based inland fur trade.

The Crow, called the Apsáalooke in their own Siouan language,
or variants including the Absaroka, are Native Americans,
who in historical times lived in the Yellowstone Riverv alley,
which extends from present-day Wyoming,
through Montana and into North Dakota, where it joins the Missouri River.

Pressured by the Ojibwe and Cree peoples (the Iron Confederacy),
who had earlier and better access to guns through the fur trade,
the Crow had migrated to this area from the Ohio Eastern Woodland area of present-day Ohio,
settling south of Lake Winnipeg. From there, they were pushed to the west by the Cheyenne.
Both the Crow and the Cheyenne were pushed farther west by the Lakota (Sioux),
who took over the territory west of the Missouri River,
reaching past the Black Hills of South Dakota to the Big Horn Mountains of Wyoming and Montana.
The Cheyenne eventually became allies of the Lakota,
as they sought to expel European Americans from the area.
The Crow remained bitter enemies of both the Sioux and Cheyenne.

From about 1740, the Plains tribes rapidly adopted the horse,
which allowed them to move out on to the Plains and hunt buffalo more effectively.
However, the severe winters in the North kept their herds smaller than those of Plains tribes in the South.
The Crow, Hidatsa, Eastern Shoshone and Northern Shoshone
soon became noted as horse breeders and dealers and developed relatively large horse herds. At the time,
other eastern and northern tribes were also moving on to the Plains,
in search of game for the fur trade, bison, and more horses.
The Crow were subject to raids and horse thefts by horse-poor tribes,
including the powerfu Blackfoot Confederacy, Gros Ventre,Assiniboine, Pawnee, and Ute.

Their greatest enemies became the tribes of the Blackfoot Confederacy and the Lakota-Cheyenne-Arapaho alliance.

"Paints-His-Shirt-Red"is a fictional character inspired by the 1972 film "Jeremiah Johnson."